Jennifer Sanders has a job almost no one else has done, working on a pilot concept only a limited number of people — mostly techies — really understand. And the future of Dallas as a diverse international city with a high quality of life for all its residents is at stake. 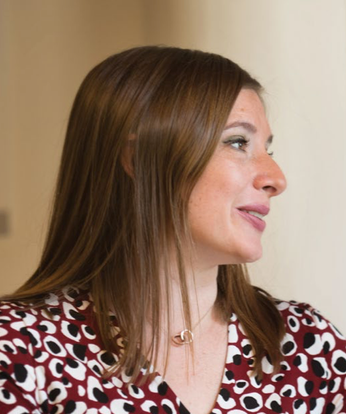 Sanders is the executive director and co-founder of the Dallas Innovation Alliance — the DIA for short. Her assignment is to develop a public-private partnership smart city strategy for Dallas. The clock on the one-year project in the West End of the city started in March 2017, and Sanders’ full report is due to Mayor Mike Rawlings in the first quarter of 2018.

What Are Smart Cities?

According to the Smart Cities Council, there isn’t yet an agreed upon definition of a smart city. In essence, smart cities collect, communicate and crunch a lot of information. Then again, so do businesses and universities, so that’s not a lot of insight.

Dr. Peter Williams works at IBM and teaches about smart cities at Stanford — he says smart cities employ the Internet of Things to improve the economic vitality, safety, environmental footprint and quality of life for a community. Better.

The TechTarget website defines a smart city as a municipality that uses technology to increase operational efficiency, share information with the public and improve the quality of government services. Still better.

For Dallas, Sanders’ mission is much more specific: determine what the intersection of technology, data and community initiatives looks like to improve economic development, resource efficiency and the quality of life for Dallas citizens.

In 2006, Dallas’ West End was being written off. Its once vibrant Shops at West End Marketplace closed, as did Planet Hollywood, the Cowboys Store and a large movie theater. Victory Park was the new place to be in Dallas.

Today, the 67 acres making up the West End is Sanders’ living lab – it’s part of the Dallas Innovation District where the smart city pilot project has taken root.

The Technology Of Smart Cities

Cities provide business and residents the infrastructure of services like public safety (police, fire and EMS departments), street lighting, water, electricity, traffic control, public transportation, parking and permitting. To determine what each department offered in resources and strengths, Sanders began by asset mapping. As sometimes happens between departments in any organization, Sanders found some communication silos.

“Seven projects already going on and the various departments didn’t know what each other was working on,” she said.

“It’s so important to identify the problem you’re trying to solve up front,” Sanders said. “It would be so easy for a city to attach itself to the technology first and figure out the problem later.”

Technology lays the groundwork for smart city infrastructure. Over the last decade, IoT sensors have better enabled the collection of data and the analytics that goes with it, allowing cities to make better decisions about where to put their resources.

The Public-Private Partnership And Data Collection

The DIA has 30 public-private partners in their smart city project, and the lead partner is Dallas-based AT&T. In 2015, the DIA began talking to AT&T about being part of the company’s Spotlight 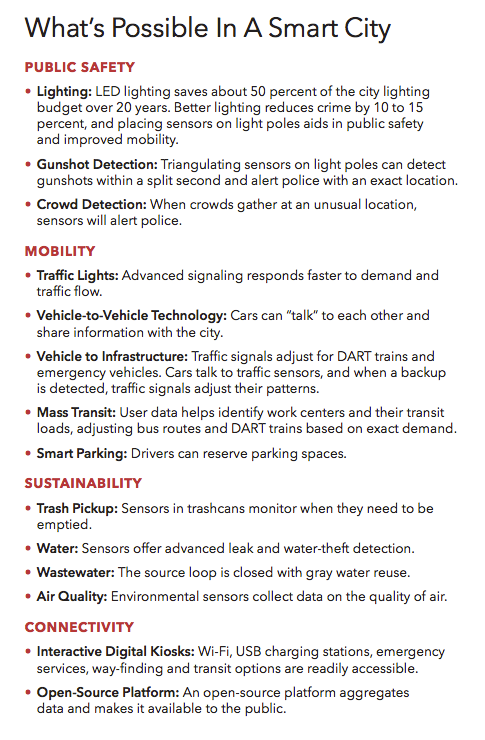 Cities Initiative, and shortly thereafter, Dallas became one of the first cities to join.

Sanders says she believes in the public-private model. “It brings all the stakeholders to the table early,” she said, “to talk about common problems, share use cases and identify what’s most necessary to the region, allowing us to move quickly.”

Along with AT&T, the network of partners includes Cisco, IBM, Microsoft, AECOM, ParkHub, GE, CIVIQ Smartscapes and the United Way of Metropolitan Dallas. The partners work together with an integrated approach, and most of the companies involved in the alliance have already done expansive projects in Europe and Asia. Barcelona, Copenhagen, Vienna and Singapore are several years ahead of their US smart city counterparts.

That prior experience within the alliance is allowing the DIA to move quickly. With projects identified and the tech support and sensors in place, the data has started to roll in. The group is already collecting data on the assigned projects and their corresponding KPIs, and soon the public will have access to the datasets, as well. “Everything that can possibly be shared — within the limits of privacy — will be on the Dallas Open Data Portal along with the analytics and visualization that corresponds to what we’re looking to solve in this first phase,” said Sanders. Public access to the integrated analytics platform is expected to go online before the end of 2017.

DIA is delivering the pilot report to the City of Dallas at no cost —the partners are funding almost the entire pilot through in-kind contributions. A grant from the United Way of Metropolitan Dallas — the first of its kind — is covering the operational costs, along with some private-sector support.

The Challenges To Becoming A Smart City

While there will always be financial challenges, if Sanders’ team can demonstrate and prove cost savings, some of that challenge will disappear and make way for new investments.

The task of procurement — getting the city’s procurement department to move in a timely way — has killed momentum on a number of projects. Sanders illustrated her point by sharing the story another city’s smart parking RFP. It took two years for the proposal to go through procurement. Once it was adopted, the technology had gone through two new iterations, and because of the way the RFP was written, the city could no longer make the purchase.

“The city had to scrap the project they had invested three years in,” observed Sanders. “Procurement reform needs to happen.”

One idea is to have collaboration between municipalities and move procurement to a regional versus local play for more negotiating strength.

One of the policy challenges cities face is adoption of autonomous vehicles (AV), because there are no standards yet for their use. Coincidentally, the US Department of Transportation has designated Texas as an AV Proving Ground test site. The one-year pilot is being coordinated by TXDOT in conjunction with Texas A&M, the University of Texas at Austin and the Southwest Research Institute.

As a smart city, Dallas will see benefits like increased safety, better traffic flow, better management and conservation of electricity and water, and declining CO2 emissions. What’s more, a smarter Dallas can use the money it saves to allocate resources into other areas. Plus, the newly rejuvenated and technically upgraded West End is now an attractive place for millennials to live, providing Dallas employers a new pool of prospective workers.

When the DIA pilot is done and Sanders delivers her final report to the city, she will share the overall case study and results. As part of the report, she will share a sustainable financial model for how these projects can scale.

In the past, property tax increases and bond programs have paid for the new assets. Some cities have adopted performance-based contracts, where the projects stand alone in silos and savings pay for each. Right now, Sanders is leaning toward a recommendation to take a portfolio approach, where the money earned or saved from one project is invested in the next smart city project.

“If we were to do a network of connected street lights with sensors and cameras and kiosks and Wi-Fi, there would be a new revenue stream where everything would pay for itself,” she stated, “and increased parking revenue from camera analytics will pay for the kiosk that will pay for the Wi-Fi . . . and you create a portfolio approach, rather than a si