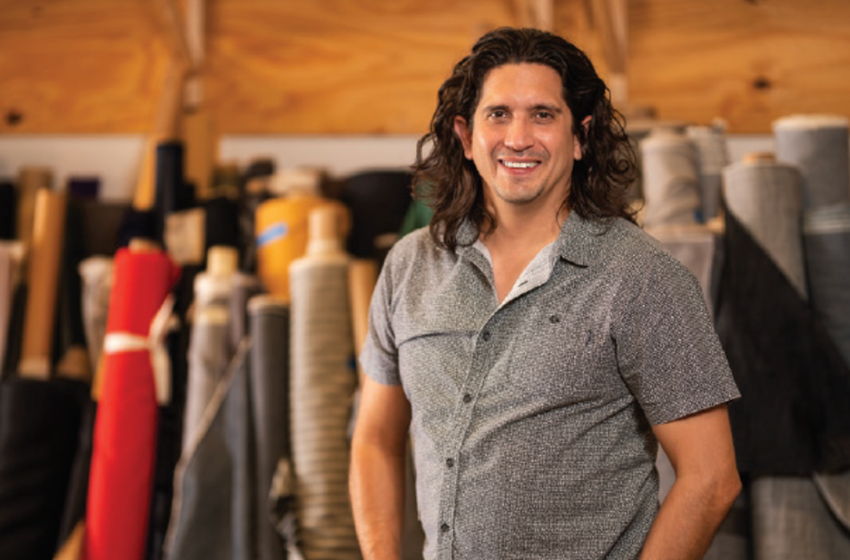 See our full 2020 list of exceptional leaders in Texas here.

For the past five years, Savittiere has run Savilino, an apron and leather goods business serving restaurants, chefs, and boutique hotels in Austin and all across the US. His tasteful, creative pieces are known for complementing the concept and décor of each of his client establishments—the custom leather menus at Jeffrey’s, for example, or the flower-print dresses and shirts at Elizabeth Street Café (one of his first projects, done in partnership with Ryan Smith at McGuire Moorman Hospitality). Over the years, Savittiere has lent his design, tailoring, and leatherwork skills to a who’s-who of top Austin eateries, from Uchi to Emmer & Rye to Ramen Tatsu-Ya.

But in mid-March of 2020, things were beginning to look bleak for Savilino. It was becoming rapidly apparent that the COVID-19 shutdowns would have a particularly devastating impact on the restaurant industry. Savittiere realized that business was about to come to a screeching halt. He—and his employees at Savilino—were on very uncertain ground.

After pondering the situation for a day, Savittiere called up John Grady, a mentor of his and an investor in Savilino, who often stopped by its East Austin production facility to help out.“I’m going to go into masks,” Savittiere told Grady.

Rolling the Dice on Masks

Grady was initially skeptical of this new mask plan. “Chris could hear the doubt in my voice,” says Grady. But as a sales and marketing pro and successful entrepreneur, Grady’s philosophy has always been to give every idea proper consideration before dismissing it. Grady ultimately encouraged Savittiere to move forward.

And move forward he did: Two days later, on Saturday, Savittiere had worked up a prototype: a washable cotton mask in a clean, gangster-stripe design, sized for adults and kids. By Sunday, the masks were up on his website. By Monday, production was cranking. Grady started coming into the facility every day to help.

But this pivot to masks was not a quick or easy fix. For one, masks were still a novel concept. Would people buy them? It was an open question. When Savilino first began cutting and sewing them, there was no clear consensus among health officials or the public on whether cloth masks were even worth wearing. “I knew I was rolling the dice on this idea, but I decided to make masks anyway,” says Savittiere. By his reasoning, getting more cloth masks in people’s hands would not only free up N95 masks for frontline healthcare workers—it would also prevent people from simply touching their own face and mouth.

The other, more pressing issue facing Savittiere was his staff. With restaurant business totally dried up, Savittiere had little choice but to let them go. When he broke the difficult news, he asked if they would stick around for a couple of days on a contract basis to help cut, sew, pack, and ship the new masks. This way, they could make a little money while looking for a new job, and Savittiere could build up some inventory.

The new mission would be to promote public safety via face masks, selling some to keep a bit of revenue coming in while also donating to those in need.

Chris Savittiere moved to Austin from New Orleans, in the wake of Hurricane Katrina. For years, he bartended part- time while running a custom sewing and tailoring shop with his then wife.  It was behind the bar at Lamberts that Savittiere got to know John Grady, who had an apartment across the street and would come into the restaurant once a week or so. Savittiere would occasionally ask Grady—who had sold a successful sales company and was now doing business consulting—about how to grow his sewing business. “He was thirsty to learn,” says Grady. “And he didn’t just pay ear service. He actually put it in place.”

In mid-March, once Savilino shifted to mask production, Grady joined Savittiere at the Savilino production facility on a daily basis, along with Chris’ two closest friends,  Craig Nigh and Camille Brower. Orders started coming in right away, and in a decent quantity. “It was a little hairy for a couple of weeks,” says Savittiere. “I think the staff thought we were crazy!” Nevertheless, they forged ahead. And Savittiere was able to continue giving his staff full-time work for the time being.

Then, at the end of March, the Centers for Disease Control officially suggested that all Americans wear masks outside their homes. “Things just blew up literally overnight,” says Savittiere. Orders began pouring in faster than Savittiere, Grady, and the team could fill them. Suddenly, Savittiere could not only keep his former employees—he could bring on new ones.

“Savittiere’s mentality was very much, ‘Let’s go hire locals. Let’s give back,’” says Grady. “We hired people who came from the restaurant industry, from hair salons, from entertainment work like lighting, sound, and stage design.” The Savilino team even developed an ingenious work-from- home solution: Home sewers could pick up kits from Savilino curbside and complete them in their own homes, with the help of an instructional video. When the home sewers dropped the masks back off at Savilino, they were paid right then and there. “Once  people realized that they could work right away and get paid right away, that part blew up very quickly,” says Savittiere. “Everybody was hungry for work.” To date, Savilino has worked with over 50 home sewers.

Thanks to the extra help, the Savilino team worked through the order backlog quickly, reducing delivery time from over a week down to just a day or two. Soon they were constructing 1,500 masks per day. Amid the frenzy, they also found time and resources for giving back. In conjunction with the Austin Municipal Court and Front Steps, Savilino donated over 3,000 masks to the homeless and hundreds to underserved children.

A Small Disaster Every Day, and a Small Miracle

Although the Savilino team was experiencing success, it wasn’t a cake walk. There were supply-chain issues, for one. The necessary fabrics and elastics were depleting fast. Fortunately, very early on, Savittiere had found a supplier  with a big stockpile of elastic and bought a ton of it up front. “I’m not running out of elastic,” Savittiere told Grady. And they didn’t—though they got close at one point.

“We had small disasters almost every day,” says Savittiere. “Once, we took on a group of 20 out-of-work sewers who had worked for a different company, but after about two weeks, the whole crew had to stop work because someone got COVID. Another shop overcommitted and we were left with thousands of orders and no one to sew them. But through those disasters we found new ways, ways that worked better. “But if there’s a small disaster every day, there’s also a small miracle,” says Savittiere. “You’ve just got to ride out those disasters and miracles together. If you stay scrappy, then you can turn any situation into something useful or good.”

Grady agrees. “We ran into so many walls that we had to find a way over, under, around—or through. We had to recognize that things are never as bad as they seem, nor are they ever as good as they seem. The amplitudes aren’t as big as they might feel in the moment.”

Today, Savilino has expanded its product line, offering masks in various materials—from Japanese chambray to a light hemp-cotton blend for the Texas heat—and masks with a pocket for additional filters. They have even partnered with Red Bull, Penn State, Harvard, and dozens of businesses and schools on branded masks.

But Savittiere emphasizes that, by getting into masks, Savilino is not trying to simply capitalize on the current situation.

“We’ve taken on 17 new staff members since all this began,” Savittiere says. “They’ve become family to us.”

When you speak to him about his rapid business pivot, he seems proudest of offering continued employment to people in the community. “We’ve taken on 17 new staff members since all this began,” he says. “They’ve become family to us. It’s been really important to us to not just keep these people employed but to also make sure that they’re getting a livable wage through this process. Not a single person here is making an unlivable wage. And when you take on a lot of new people at once, there’s a tremendous responsibility that you feel towards them. If you have to let someone go, they’re literally going to have to figure out how to survive. That puts on a lot of pressure, but also just heightens the importance of how well we manage the business.”

“Now, we’re focused on giving back and being a part of the community,” says Grady. “When we work with schools, local K–12s or colleges like UT and Baylor, we look for ways to offer discounts, bulk pricing, givebacks, et cetera. We’ve even bought advertising in struggling school papers and given them a percent of sales. We have really tried to help out in that arena.”

What does the future hold for this retooled version of Savilino? “That’s really uncertain right now,” says Savittiere. “We are looking now at the next phase, for the products we can add that will take over when masks begin to slow down. We realized that we get a lot more satisfaction out of providing something to the masses versus a niche market. But we do think that masks will be around for a while, even if they aren’t the key to our future success.”