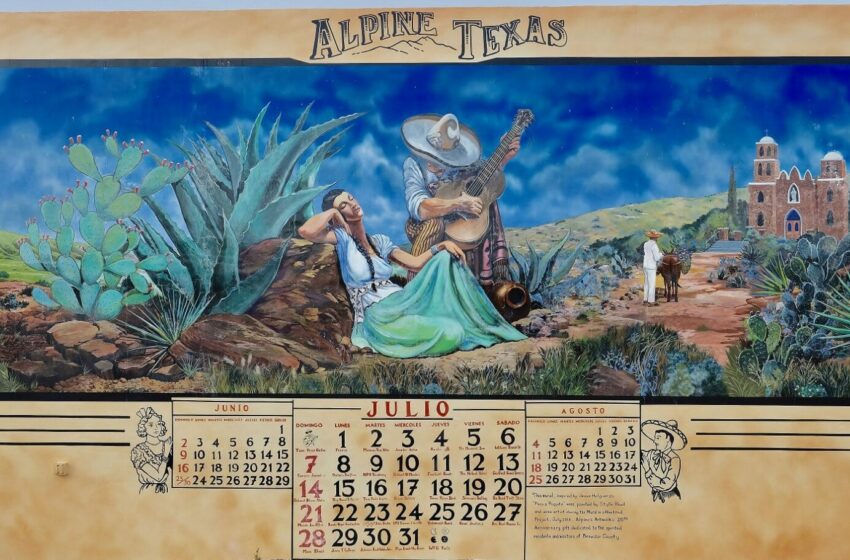 West Texas offers visitors many charms, from Big Bend National Park to McDonald Observatory to the esoteric charm of Marfa. Lately, these long-established draws have been joined by a flourishing arts scene in the small but fascinating town of Alpine.

Alpine is notable for its high-quality murals, representing the type of rich, expressive public art rarely found in small communities. While the late Donald Judd’s minimalism gives the nearby Marfa art scene a veneer of sophistication and international appeal, the murals and galleries of Alpine are reflecting the more localized, art-related pulse of Brewster County and Big Bend.

But don’t take that to mean there’s a competition between the two camps, says local jewelry designer David Busey, who serves on the City of Alpine’s Beautification and Environmental Board. “Rather than a rivalry between the art communities of Marfa and Alpine, there has evolved a marketable synergy that enhances the whole region as an attraction,” says Busey. “In that respect, Alpine has lately gotten more attention: Texas Monthly and Texas Highways have both featured stories about Alpine, describing it as a ‘thriving arts colony’ that offers an enjoyable and ‘accessible art experience.”’

Art in Alpine has a long history, beginning with the Department of Drawing and Domestic Arts at Sul Ross Normal College (today known as Sul Ross University), established in 1917. The school, which graces a picturesque hill on the eastern side of Alpine, held an Art Colony all the way back in 1932. Developed and led by Texas artists and muralists Xavier Gonzalez (1898–1993) and Julius Woeltz (1911–1956), the Art Colony centered around two six-week courses offered to enrolled Sul Ross students as well as outside artists. Mary Bones, director of the Museum of the Big Bend on the Sul Ross University campus, says that the colony “was a very successful and popular offering for the college.”

Several of the colony’s artists would find national prominence under the Works Progress Administration murals program of the 1930s, including Gonzalez and Woeltz, the latter of whom won a hotly contested post office mural competition in Amarillo in 1940. “Before coming to Sul Ross,” says Bones, “Gonzalez and Woeltz traveled to Mexico to study the great muralist Diego Rivera. At Sul Ross, they each worked on a number of large works that are in the collection of the Museum of the Big Bend. The summer Art Colony continued until 1950, with some of the most prominent Texas regionalist artists coming to the high desert country of the Big Bend to teach studio work and (plein air) techniques.”

In recent decades, other artists have picked up on the mural theme, resulting in a contemporary mural renaissance. This new wave includes murals by prominent Texas artists like Stylle Read and Christina Sosa Noriega. “Here in Alpine, it’s really exciting to see the different individuals who picked up on the concept and ran with it, particularly in the alley between Fifth and Sixth[Streets] in our historic downtown district,” Alpine’s Tourism Director, Chris Ruggia, says. “That more recent activity has expanded not just the number but the variety of the works of so many local artists. It’s very exciting and has given visitors so much more opportunity to spend time exploring.”

Alpine’s current Alley Art scene was a creation of many local artists, including Liz Sibley, Carolyn Mangrem, and Nancy Whitlock. Whitlock even created a walking tour featuring all the town’s murals, navigated by a handy brochure. As she created the tour, she wanted to make sure visitors got to see all the murals, not just the ones in the main alley. “The story behind the fascinating murals on the south side of town is equally interesting but less known,” says Whitlock. Over the years, several businesses in what was once considered the “Hispanic side of town” began to feature mural art on their exterior walls, and according to Whitlock, they also contribute to the “beautiful bounty of murals in Alpine.” Says Whitlock, “I created a mural map because I felt that the tourists coming into my gallery weren’t getting to see all the best Alpine had to offer. What surprised me was the outpouring of interest people had in the concept of an illustrated map. And amazingly, the number of murals I myself was aware of grew as I walked around Alpine for the project.”

The Alpine Downtown Association, founded in 2016, and the City of Alpine have recently promoted another annual mural-related event, Harvest Moon Weekend. In September of 2018, the first Harvest Moon Weekend took place, celebrating the end of a long hot summer with music and art under—what else?—a harvest moon. Last year’s festival featured a large mural in progress by the Sul Ross Art Club, painted under the direction of Carol Fairlie, the university’s Professor of Art. The mural celebrates the original Sul Ross Art Colony developed by Gonzalez, Woeltz, and other prominent regional artists.

Alpine’s resurgent art scene has helped lure visitors to Alpine, largely from nearby cities like Midland, Odessa, and El Paso. But many come from far and wide. “The Alpine Downtown Association has used the arts as a key draw to the area, and it has worked quite well,” says the association’s president, Jim Street. “We created the slogan ‘Heart of the Arts’ for one event and it has kind of stuck as a slogan for Alpine in general. Our most successful event to date has been the Harvest Moon fest. We dedicated one of our first murals, by local artist Pauline Hernandez, during the first Harvest Moon celebration.”

Busey predicts that the present mural movement will be an “essential link” between Alpine’s artistic legacy and a marketable, visual identity that makes it a sought-out destination for visitors. He notes that this is similar to what’s happened in Taos, New Mexico, where a unique arts history has distinguished the town as an important  cultural destination. “The Museum of the Big Bend is already a prime visitor attraction,” says Busey, “and Alpine’s associated mural movement could be an important visually related feature that will see Alpine also recognized for its historical relevance, from the days of the Art Colony to today.”