WHY OUR TEXAS EDUCATIONAL PIPELINE IS LEAKING

Call it a talent crisis, or a talent challenge, or a talent dilemma – it affects companies in the technology field disproportionately to the rest of the workforce. The gap between available jobs and the talent needed to fill them was addressed in May by a panel of experts at the Texas CEO Enlightened Speaker Series, which was part of the Austin Technology Council’s CEO Summit.

Brian Kelsey, principal and founder of Civic Analytics, presented the preliminary results of a survey of Austin Technology Council members. It showed openings in 2,500-3,500 tech-related jobs per year, but also showed that universities around Austin are graduating only about 1,500 students qualified for those jobs. “There is a big gap between the demand and those who are graduating from the local universities,” he said.

The traditional education model is partly responsible for that gap, said Veronica Vargas Stidvent, the chancellor of Western Governors University (WGU) Texas. That model paired the number of students graduating from regional universities with the number of available jobs. But now, schools are graduating too few STEM and IT majors to fill those jobs. “Even if we lean forward into the K-12 space and increase the pipeline, if you’re not planning on hiring in the next dozen years, you might find someone,” Stidvent said, “but if you are going to hire before then, you’re going to hit that gap.”

That’s because kids aren’t being pushed toward STEM and IT fields in school, said Nathan Green, the vice president of IT Solutions at SureScore and founder of Campus2Careers. Under HB 5, the new K-12 legislation in Texas, students in eighth grade are expected to pick a career “pathway” – an early indication of the major field they intend to pursue. The point, Green said, is to make the kids “future ready” – not just college, or career, or civic-ready. But despite the investments in STEM education, the top category of interest among eighth graders is arts and humanities or criminal justice, “because of what they see on TV,” said Green.

Education and training is the next highest category of interest. Students are influenced by teachers and counselors, and want to be like them, said Green. “Counselors are not

telling kids about the larger world and the current economy, and that the student can make more money in tech versus education,” he said.

In fact, IT as a field of interest ranks very low. Green said about 51,000 students in Texas have picked IT pathways. “While it sounds like a lot of students, that number will drop off dramatically as they head to college,” Green said. “Only 3,200 students in college today are in IT related majors. That’s a big issue.”

Part of that is a reflection of changes that have taken place in education over the last 30 years, said Wade Allen, the president and CEO of search firm Cendea. In 1985, he said, 75 percent of our learning came from the classroom. By 2025, that will be down to 25 percent. Where will the rest come from? Things like research opportunities, entrepreneurial opportunities, civic engagement, mentoring, and more. A recent Rice University survey found that students there are already experiencing this new paradigm – 10 years sooner than expected. 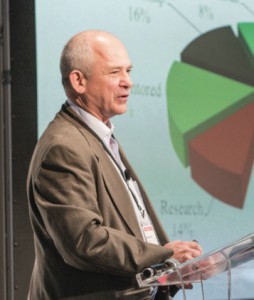 “This generation of 35 and younger students look at each new job as a new mini-Master’s degree,” Allen said, “where they can show what else they have learned, what else they have achieved and how they can control growing their own career because they know nobody is going to help them do it.” Education is more about what you can do, he added, whether it was learned in college or not. “Work is about fostering creativity.”

Stidvent said the 35 and younger student could be an untapped asset. But their problem is that they might lack the educational qualifications to get into a good tech job. “We have a leaking pipeline,” she said. Students might enroll in STEM and IT fields, but they don’t finish their degrees. “The retiring population is better educated than our younger population,” she said. “We need to reverse that trend.” She suggested that people with some college but no degree can be re-skilled and up-skilled to fill those positions.

Kelsey agreed. Citing his survey of Austin employers, he said, “All tech jobs don’t require a four-year degree and employees with associate degrees and certifications are getting hired.”

But he said another barrier to employment is a requirement that applicants need at least five years’ experience. “We have to find better strategies to get recent graduates into the supply chain faster to fill the gap,” he said.

One way to do that is to stop relying on the traditional model of education. “We have to leverage innovative models of learning,” Stidvent said. “We need to lean into the pipeline, produce more teachers, and encourage students to get those kinds of degrees. We also have to address adult learners.” She warned that other cities in the country have caught on,

and are already making use of people with certificates or associate’s degrees.

Kelsey said his Austin survey shows the needs of employers and the certifications offered in the Austin ISD are out of alignment. For example, the AISD offers certifications in such fields as Network Plus, Cisco Net Associate, A+, Sun Cert Java Associate, and Adobe Dreamweaver. “Sixty percent of respondents reported that all certifications currently offered in AISD were not important,” Green said. Instead, employers said they needed applicants with experience in Javascript, C++, Java, Linux, PHP, and Python.

On the plus side, Green said students are picking up a lot of these skills on their own. Android development, Java, Java-Script, C, C++, and Python were all IT skills students said they’re learning themselves.

Now, employers must create the culture in which young people would want to work, Allen said. It’s up to the CEO to ask the tough questions: What would make them come to work here?  What would keep them here? “If we put on the same old boots, and take the same walk, we’ll get the same results,” Allen said. “Time to put on the track shoes and run a new race to get there a lot faster.”

How Long Will the Cool Factor in Austin Last?

Stidvent told the Austin audience that it’s time to stop relying on Austin’s “cool factor” as a carrot to entice talent. “When you think about competing and coolness and the quality of life,” she said, “other cities and employers know they are less cool than Austin and are creating their own solutions with an eye to quality of life, as well.”

Pay will be a factor. Kelsey said Austin has a pay gap with other cities that a lower cost of living alone won’t be enough to overcome. San Jose, Seattle, San Francisco, Washington, Boston, Raleigh-Durham-Chapel Hill, and Dallas all pay more for tech jobs than Austin, and Austin is below the national median. (Figure 1) Stidvent suggested an engineering grad from Texas A&M would be more inclined to take a position in Houston for more pay than in Austin.

The panelists agreed that to solve the talent dilemma, there is no single solution. “It’s going to require all of those pieces,” Stidvent said. “The four-year and two-year universities, thinking creatively about certificates and associate degrees and adult learners.” She said it’s no longer just the regional four-year universities that will supply talent in the future.

Allen said it’s not a “one size fits all” solution. “There are huge driving factors between age groups,” he said. “Workers now look out for themselves because corporate America no longer accepts that responsibility.”

Allen warned that the CEO plays an important role in closing the talent gap – and the company’s culture and chemistry has a lot to do with worker retention.

Thank you to our Enlightened Speaker Series sponsors:

How to Develop Your Organization’s Talent on...