The Lone Star State continues to be one of the fastest growing economies in the country and is home to six of the largest cities in the US. Along with this high-speed growth comes social problems plaguing our cities: homelessness, poverty, educational and health disparities, crime, and traffic. The nonprofit sector is often charged with leading efforts on social change. In an attempt to keep up with demand, the number of public charities in Texas has grown steadily over the past decade, with over 70,000 registered organizations in the state. This represents an increase of 24 percent since 2005 – significantly higher than the nation-wide increase of 18 percent according to the National Center for Charitable Statistics.

Nonprofit Employment Is Larger Than Expected

Based on a new research study called, “On the Verge,” here are some statewide benchmarks on the nonprofit sector.

Nonprofits are a critical driver of the Texas economy, with overall revenue approaching nearly $71 billion and assets of over $150 billion. The nonprofit sector is also a big employer, with approximately 1 out of 23 workers is employed by sector statewide. 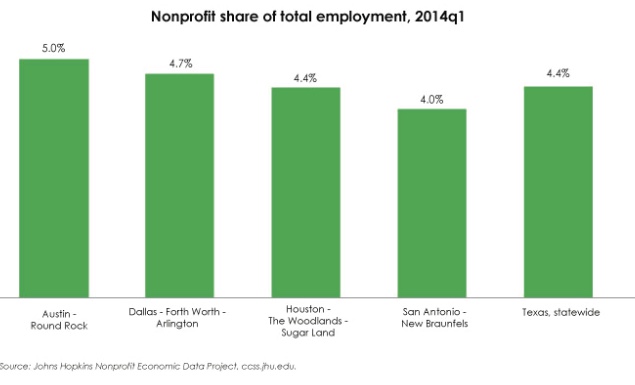 Over the past five years, thousands of new jobs have been added to the sector, even though this period included the end of the major economic recession. Between the first quarters of 2009 and 2014, nonprofit employment in the state grew by 17.3 percent with some major metropolitan areas, including Austin and Dallas, growing more than twice as fast. In fact, the growth rate of nonprofit employment statewide exceeded that of the for-profit sector. 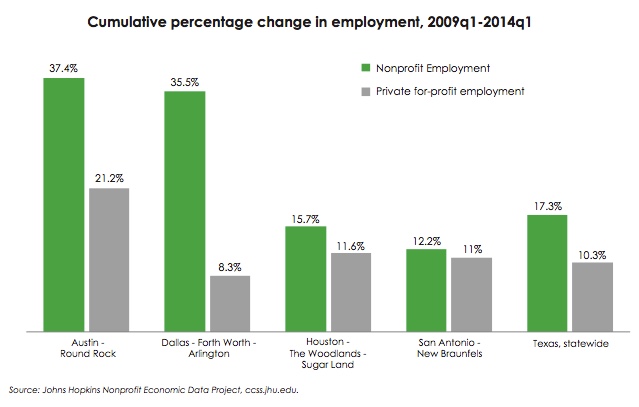 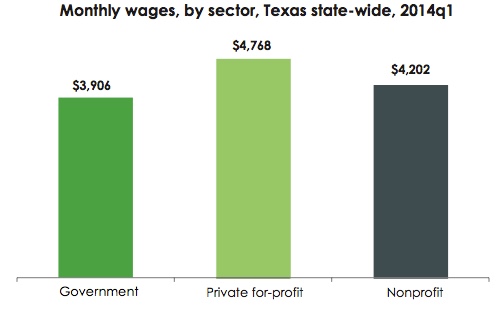 Despite growth in the nonprofit sector, it’s evident that persistent social issues still remain. According to the U.S. Census, Texas ranks last nationwide in educational attainment, with less than 80 percent of students receiving a high school degree. The latest census also found that 17.6 percent of people report living below the poverty line, compared to 15.4 percent nationwide according to the U.S. Census Bureau. These are just a few examples of what we all witness: Growth in the state of Texas has come with challenges.

In the “On the Verge” survey, nonprofit leaders reported increased demand and cited significant challenges to long-term, financial sustainability. Similar to findings on the challenges facing nonprofits in a 2013 report by Texas A&M University’s Bush School of Government and Public Service, more than 42 percent of nonprofits statewide are operating at a deficit. In addition, the Bush report found that nonprofit hospitals and institutions of higher education hold 40 percent of assets among nonprofits, but represent just over one percent of the nonprofits in the state.

With this increased demand and constraints, nonprofits throughout the state are looking for new ways of operating. In addition, complex community problems cannot be solved by any single entity, whether it’s a mission-driven business, government agency or nonprofit group, but instead requires a cross-sector, collaborative approach to improving our communities.

It’s Time For A New Approach

In the midst of these challenges, the demand for services is increasing and persistent social problems are not going away. In light of this current state of the nonprofit sector, it’s time for a new approach.

New ideas for how we address social challenges seem to emerge daily. New business models, investment strategies and forms of collaboration are being used throughout the state and show great promise for improving peoples’ lives.

“On the Verge” suggests action steps for nonprofit and community leaders from all sectors who are looking to create meaningful and lasting social change. Nonprofits are at the heart of community problem solving and must take a hard look at their own effectiveness, identify their intended impact, develop sustainable business models, and recruit and retain visionary, results-driven leaders. Additionally, cross-sector leaders must evaluate and promote financing options that allow nonprofits with proven programs and social innovations to increase their organization’s reach and impact. But solving our cities’ most complex social issues is not a nonprofit problem, it’s a community problem. With ever-growing challenges, the entire community must commit to a common agenda and bold, new approaches to what we’ve traditionally thought of as “collaboration.”