HOW DAN GRAHAM AND BUILDASIGN HIT THE GROUND RUNNING

Bootstrapping a business requires commitment, flexibility and action. When Dan Graham and his business partners decided to launch BuildASign.com in 2005, they put those traits into action staying flexible as the business model evolved into the success story it is today.

At BuildASign.com, customers can create their own custom signs, using template software to tweak the design until it’s just how they want it. The folks at BuildASign then do the printing and ship the finished product off to the customer. It’s a simple enough idea, but the actual process of bringing the business to fruition took several iterations.

Graham and his partners originally started selling design software to sign shops to expedite their sign-making process. But when sign shops weren’t ready to embrace the new process, the BuildASign team decided to make their own sign-building website, knowing their idea was a good one. Originally, they outsourced the actual printing of the signs to print shops in Austin, but the turnaround times weren’t quick enough to meet customers’ expectations. Graham himself joined the production line at shops, working to get signs made as fast as possible, all while finishing up law school—but he knew that couldn’t be a permanent solution for BuildASign.

Ultimately, Graham and the BuildASign team made the decision to buy a printer and make the signs on their own. They bought a printer, leased a 1,200-square-foot building, and started production officially on January 1, 2006. Within one month, BuildASign was turning a profit. The company’s story is a bootstrapper’s dream come true, and also a testament to Graham’s dedication and business sense.

By 2010, BuildASign was pulling in about $20 million in revenue and had expanded far beyond its original four employees, including the addition of an in-house web development team.

Three years ago, BuildASign moved its operations to a 130,000 square-foot building in North Austin. The company now has more than 270 employees and reported more than $57 million in revenue in 2013. 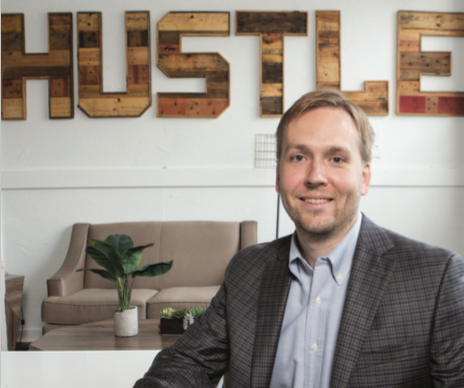 In 2015, Graham and his partners decided to sell part of the company, taking on PWP Growth Equity as an investor. Graham says he was looking for an investor not so much for the financial help, since BuildASign is doing just fine financially, but for the added experience.

“Our business is very profitable, and it’s growing on its own steam,” Graham says. “We don’t need money to grow the company or to become profitable, so it was more about partnering with the right investment firm that’s going to accelerate our growth, open up new areas of opportunity and help fill gaps in our own experience set.”

Graham is also an investor in several Austin-area companies, from tech startups to consumer packaged goods. He’s excited about his investment in a new company, Broomly, which provides online booking for home services including house cleaning and lawn care. Graham works as a mentor for young entrepreneurs and serves on the board at SKU, a consumer package goods incubator in Austin.

Personally, Graham is immersed in non-profit projects in Austin, a field about which he is clearly passionate. He founded Philanthropitch, a project that works a lot like Shark Tank, with non-profits pitching their causes to six philanthropist judges who deliberate and decide how to split funds between the non-profits to best meet their needs.

Graham spends much of his free time mentoring start-ups and partnering with Austin mayor Steve Adler, working on some of the city’s social initiatives, trying to help leaders of community initiatives and non-profits think more like entrepreneurs and function as successful businesses.

BuildASign has continued to expand into more areas of service, partnering with large franchises and entering into the apparel market just in the last year. Selling into franchises has given BuidASign a large boost in growth, generating a large customer pool with multiple locations. The company’s apparel website, AlliedShirts.com, allows customers to design and print custom shirts, while another BuildASign website, EasyCanvasPrints.com, prints customer photos onto ready-to-hang, stretched pieces of quality, artistic canvas.

In recent years, BuildASign has also expanded outside of its physical sales borders, now selling to customers internationally, including Canada, Germany and the United Kingdom—just one more way the bootstrapped start-up is lengthening its reach.

Graham is quick to credit BuildASign’s growth to his team. His advice to anyone looking to bootstrap a new business is to make sure it’s the right step, and then to hire the best of the best.

“You need to find insanely great people–the people who are those one of a kind folks who really drive the company forward,” Graham says. “As a bootstrap company, you can’t afford to make a lot of mistakes in that process. Bringing on fantastic people who hit the ground running, immediately figure out what needs to be done and hustle to do it is key.”

Finding and attracting the best and the brightest can be a challenge, especially in markets where the workforce is tight. Graham’s suggestion: Always be hiring.

“Keep your eyes open everywhere, regardless of whether you’re hiring someone for that specific position or not,” Graham says. “So when you find one of those people who’s a 1000 watt bulb in a 10 watt world, you glom onto those people and bring them on and start working with them right away. A lot of times, you figure out what they’re going to do later or they move several times within the company, depending on where they’re needed. It’s absolutely critical to maintain the right A-level players that you need to grow quickly.”