In 1994, the human population of Texas exceeded that of cattle for the first time in the state’s history. As milestones go, this was marked by little fanfare, yet it’s definitely worth noting. Why? One interpretation is that this signaled the move away from natural resources to human capital. Texas was traditionally associated with cotton, cattle, and oil. 1994 marked a new beginning. Examination of such milestones is necessary for an informed discussion of our destiny. To predict the future accurately, we must look to our past.

This article is about Texas in 50 years, the Texas of 2065. To get a sense of what we should consider when making predictions, it’s worth going back, not just to 1994, but all the way back to 1965. What happened 50 years ago has left an indelible mark on us, a bit like a brand, one we still carry proudly.

For starters, the question of where Texas is going to be in the coming decades has some definite demographic answers. The beauty of demographics is that the factors influencing population change are fairly straightforward. People are born, and they die. People move in, and they move out. That’s it. Yes, there are occasional catastrophic factors that change the rate and severity of those two dynamics. But with this basic information in hand, one can make a fairly educated guess of what the population—and the workforce—is likely to look like in the coming decades. 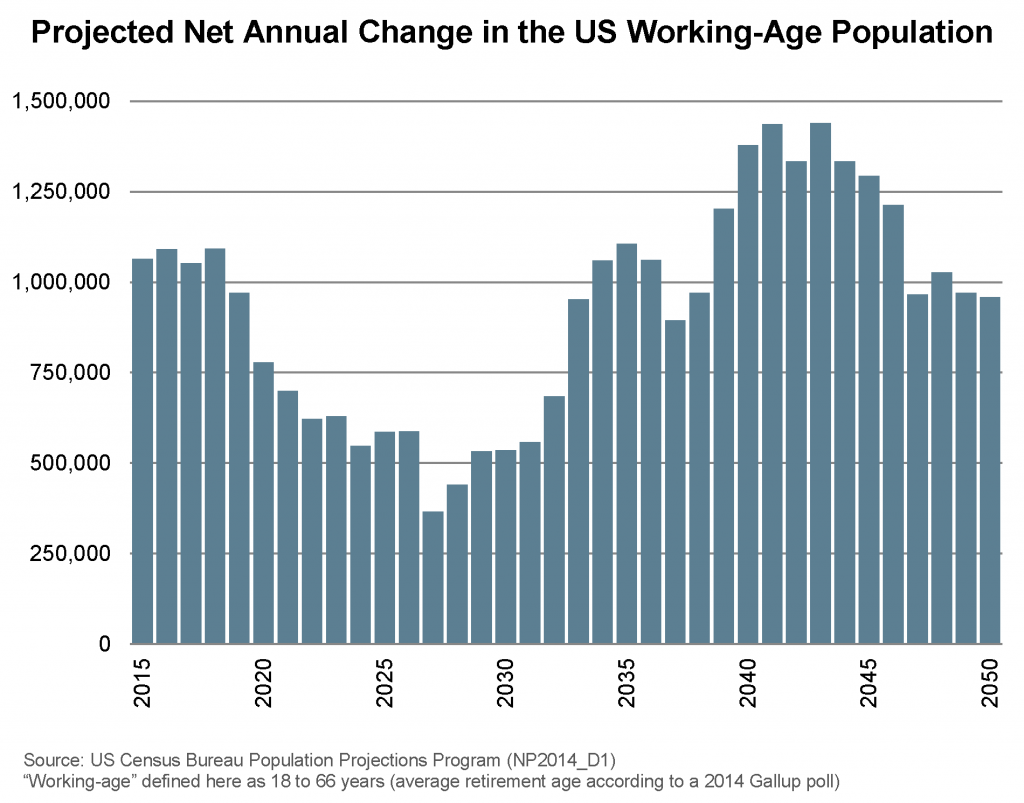 One demographic trend worth watching is the approaching deficit of labor. A look at the number of people projected to enter the national workforce annually shows steady declines through 2027, followed by an equally steady increase into 2040 and beyond.

The picture for Texas is quite different. The projected growth of the state’s working-age population shows none of the radical decline seen at the national level. Why is that? For the same two reasons that always hold for demographics: births over deaths and in-migration versus out-migration. Fertility rates in Texas have long exceeded national rates. And for many decades now, more people have moved to Texas than have left the state. This pattern is predicted to stay the same through 2050. Why is that a fairly safe prediction? One reason is, Texas has a relatively young population, with a higher percentage of Latinos, a group that has traditionally had above-average birth rates. The other reason is, we are likely to continue to see consistently high net migration to Texas. Our border with Mexico, coupled with a host of economic and geographic factors, continue to attract people from both inside and outside the U.S. 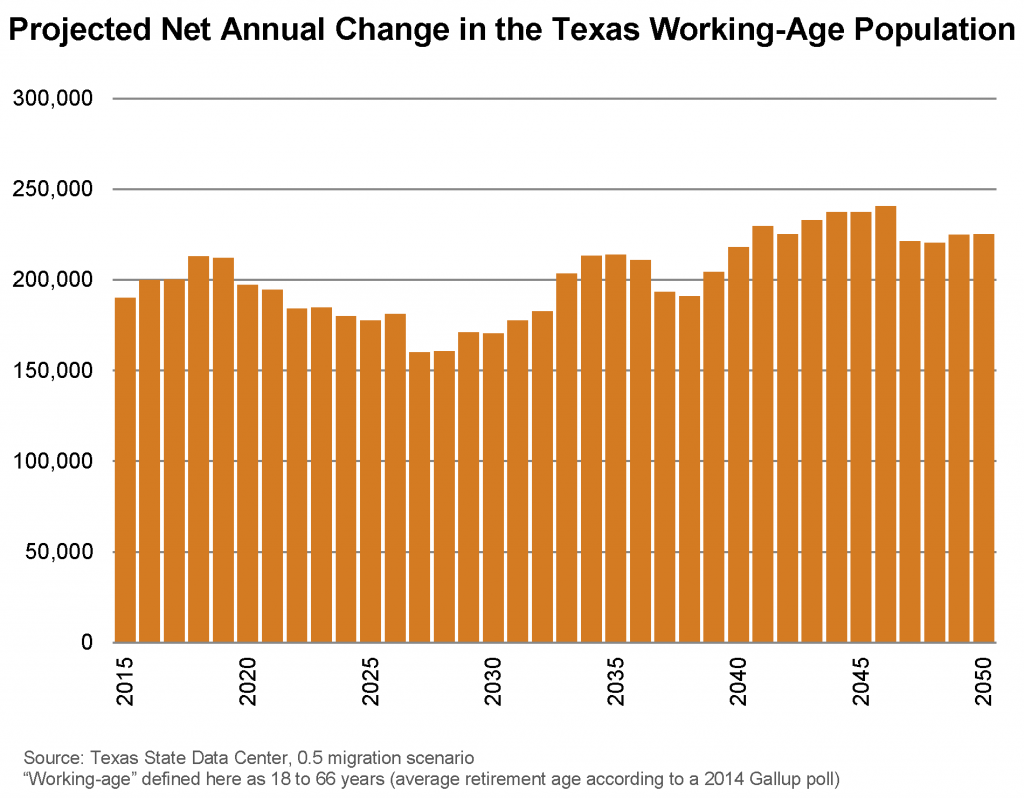 Counter-forces—such as immigration policy and delayed retirement age—may obscure or even reverse the prevailing flow. Still, there are some reasonable demographic predictions we can make for Texas in 2025, 2040, and even out 50 years to 2065.

The next range of predictions center on the economy. Taking the same question (Where will Texas be tomorrow?) and rolling it back 50 years puts us in 1965. What did we know about the future when LBJ was president? We actually knew quite a bit. The folks at TI knew the semiconductor would have revolutionary implications: 1965 marks the date of Moore’s seminal paper on computing power, now known as Moore’s Law. The folks in the energy business knew oil would rise and fall, and other energy sources would become competitive. We knew that cities were flexing their muscle in new ways. On social issues, Daniel Patrick Moynihan was prescient on the importance of family structure to economics. In bioscience, Robert Holley’s work on the synthesis of proteins from messenger RNA paved the way to genetic research and the sequencing of DNA. While we didn’t know how these findings would play out, the seeds of change were there and were well understood.

Looking at technology breakthroughs in this decade, we can paint a broad outline of Texas in 2065. This picture is likely to include the emergence of bio-health as a major economic and social driver; a far more stable energy market due to the wide range of newly available sources; and a restructuring of the manufacturing sector that will see employment continue its downward trend. This last point has wider applicability to the overall structure of the workforce.

High-tech and high-touch jobs will be our economic future. In “high touch,” included are the occupations that provide direct services to both consumers and businesses (in other words, everything from beauty salons to customer liaisons for international transportation and logistics services). The demand for these occupations will certainly require more soft skills, skills we still don’t fully understand (though we know them when we see them). Similarly, the technology sector will require more creativity, not just more skills. In each case, however, humans will have to become more proficient at working with machines—whether in the form of industrial automation (robots) or the applications that drive them.

And if these largely national trends are predictive, how will Texas stack up in 50 years? First, here are the elements that will come into play:

The two trends above—the continuing role of innovation in the state’s economic future overlaid by state and national demographic trends—have implications for the workforce.

Nationally, manufacturing employment has been on a downward slide, dropping from 26 percent of total employment in 1970 to just nine percent today. In part, this decline in employment reflects the outsourcing of labor to companies both here and abroad. However frustrating to policy-makers, this solution follows a perfectly logical pattern driven by a combination of labor cost and the lower costs associated with container-based shipping. And the high-skill manufacturing jobs that have remained in the U.S. are, in some cases, threatened by the retirement of a generation of skilled workers with no one to replace them (one of several issues influencing todays “skills gap” discussions).

This downward trend also reflects the advancement of technology. Yes, technology supplants labor. This is far from news, but no one would suggest that this trend will not continue—or indeed, to pick up pace. Entire supply chains have disappeared as we find more creative ways to use IT. If business needs dramatically fewer workers, there is no crisis of worker availability. 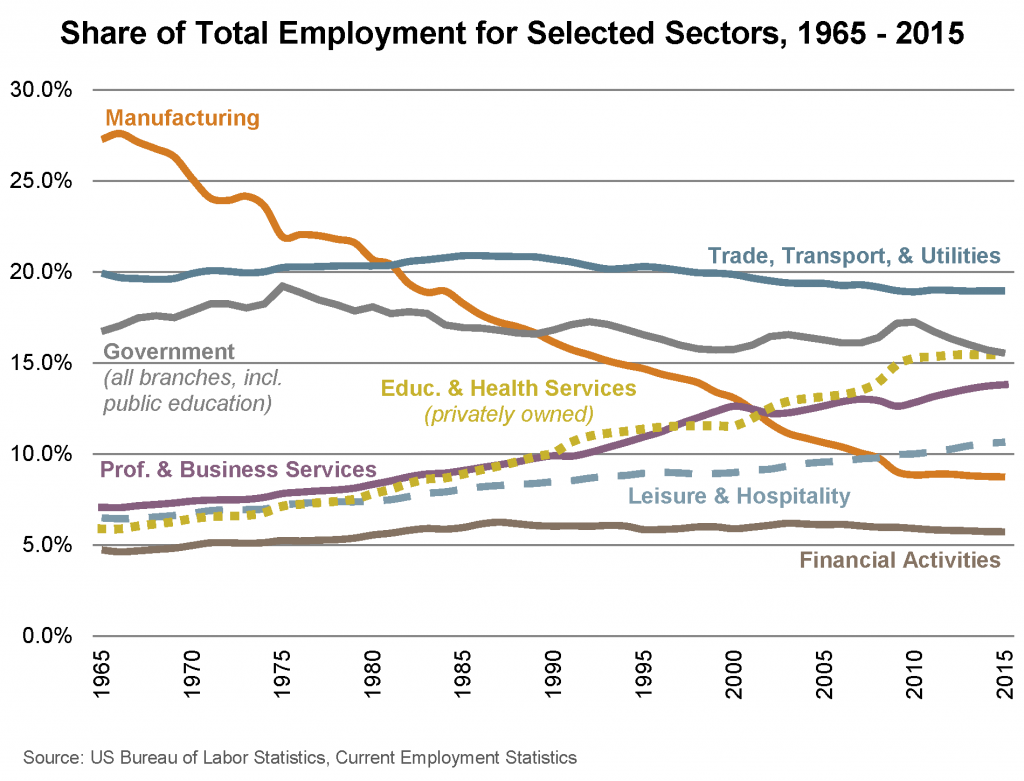 Professional and business services (a category that also includes many technology sectors) and health services are taking a greater share of employment. While many of these sectors offer opportunities for high-wage employment, they also contain large numbers of low-skill, low-wage employment. The broadening gap presents challenges for policy makers, employers, and public services alike.

Needless to say, these issues will almost certainly color the landscape of the mid-21st century. And each of these counter-trends is politically fraught—something we are aware of each day as we read the news. However, the following predictions for the future of employment in Texas are likely to hold:

So what does this mean for Texas in 2065—and in the intervening years? Where does our state’s competitive advantage lie? Once again, let’s go back 50 years and ask ourselves what we did right then. First, we capitalized on technology. We appreciated that the semiconductor would be crucial, and we doubled-down on it in myriad ways. We supported the companies that dominated that field, and we invested heavily, from TI and Raytheon on the corporate side to the aggressive commitment of public dollars: Sematech in Austin, NASA in Houston, and telecom in Dallas. We capitalized on biomedicine with health sciences in Houston, San Antonio, and Dallas. And we built roads, bridges, and ports to support the easy movement of goods and people.

This model should give us confidence in Texas’s competitive position. A commitment to R&D, continued investment in our universities, and a no-holds-barred approach to recruiting and maintaining the best talent pool in the world have been the keys to the state’s success. We don’t have to know which app will launch the next billion-dollar company, but we do need to know that technology will drive opportunity. The economic model hasn’t changed, and it won’t. It’s all about land, labor, and capital. When you maximize those assets, and when you do it with a commitment to technology, you will own the next 50 years.

Jon Roberts is a Principal at TIP Strategies, an Austin and Seattle-based organization working with communities to develop innovative, publicly supported economic development strategies. Prior to joining TIP, Jon was the Director of Business Development for the State of Washington and the State of Texas.