. . . ABOUT THE KEYS TO A CULTURAL TRANSFORMATION

The very first issue of Texas CEO Magazine focused on how CEOs create a powerful corporate culture. Since then, culture has been a recurring topic covered from many viewpoints. A look at the current home page of the magazine’s website lists three articles on culture, ranging from employee engagement, to leadership strategy, and keys to an innovative culture.

Because of the importance of culture within the context of transforming organizations, Texas CEO Magazine collaborated with Endeavor Management in a study to gauge the effect that organizational culture has on the implementation of corporate strategies. The goal of this research is to measure culture’s perceived strength and impact on the successful realization of strategic goals. We contacted over 1,000 top leaders of organizations, mostly from Texas, to learn about the importance of their organization’s culture to achieving their strategic goals. 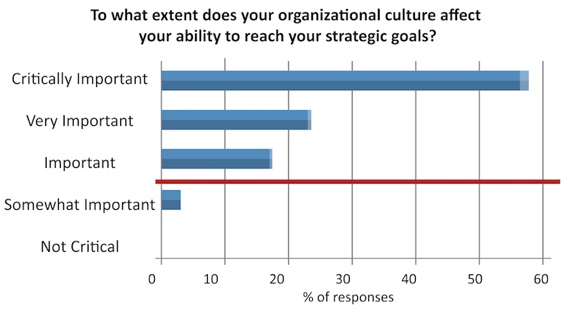 What we learned is that leaders “get it.” Ninety-seven percent of the CEOs responding said their organizational culture strongly affects their ability to reach strategic goals. Fifty-seven percent said they are “absolutely critical.” While it might be somewhat intuitive, it’s still an impressive insight. This means that the 97 percent of CEOs who responded think that the “soft side” – the values, attitudes, beliefs, and behaviors – within an organization are strategically important.CEOs also indicated the most important keys to a successful cultural redesign is leadership commitment and the second-most important key is clarity of what cultural elements to change. The other factors came out at about the same level of importance. From most important to least:

We asked CEOs what their experience and outcomes have been when trying to attempt a cultural change. Of those that have attempted it, only 15 percent say they completed at least one successfully. This percentage is in line with other research indicating cultural change initiatives are largely unsuccessful. Interestingly, only 32 percent of the respondents felt their organization was programmatically prepared to plan or fully implement a cultural change. Sixty-one percent were only “intuitively” or “informally” prepared, and seven percent felt not well prepared.

When we asked what the common reasons for failure in a cultural redesign were, the top reason given had to do with effective leadership, including misalignment of leadership priorities, clarity of CEO expectations, not communicating goals clearly, and poor/incompetent leadership. In priority order, from most common to least are:

Significance of the Research

Dr. Frank Larkey, who has spent the greater part of 30 years researching human behavior and organizational culture, says that if you look at current research, ineffective leadership is not the root cause of failed 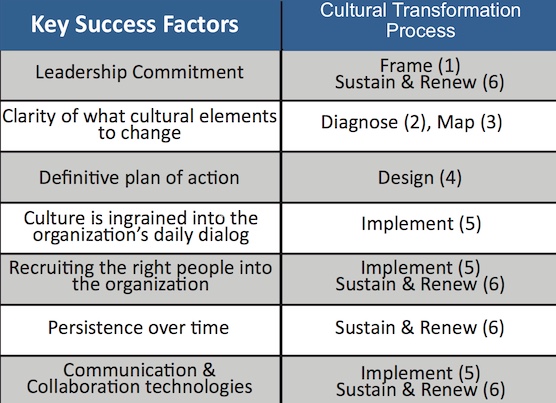 cultural or strategic change initiatives, merely one variable. It is insufficient to say, “It’s the leadership” in response to why they fail. Yet, when implementing strategy, organizations put significant emphasis in the actions of the leaders and on the programs of strategic initiatives. There is much less focus on driving the required changes in mindsets and behaviors throughout the organization to affect change. Change management and its programmatic emphasis has been part of business processes for several decades, but the difficulty in achieving cultural change has highlighted the need for being more effective on the “human side” of the equation. This isn’t an either/or dilemma. Both process and culture have to be a part of any strategic initiative or the risk of failure is high.

To lessen the risk of failure, it’s imperative that a critical number of employees are engaged in this work along with the company’s leadership. Employees, led by a company’s cultural champions and visibly supported by executive leadership, build and sustain a community of change. It is through the building of the community that enduring and sustainable cultural change is created.

So, culture is the platform upon which strategy is delivered. A “soup to nuts” approach is needed to reduce the risk of implementation failure and is outlined in the Cultural Transformation ProcessTM. 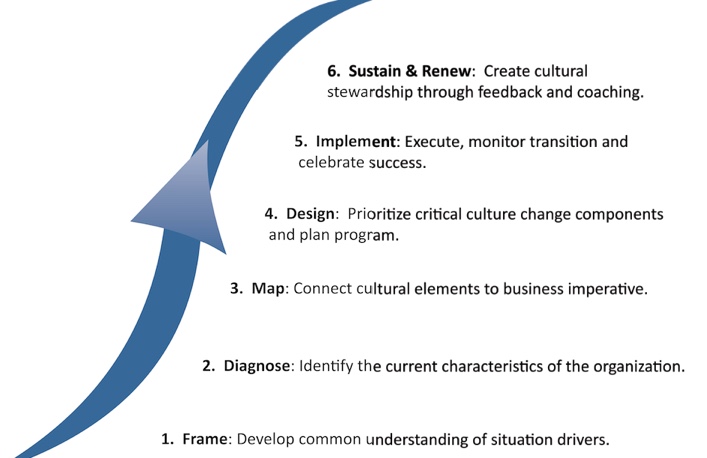 These six stages guide an organization through the process of understanding important cultural elements, identifying what elements need to be modified, planning it out, taking action, and building the community to make it stick.

By juxtaposing the key success factors of cultural change identified earlier next to the Cultural Transformation Process, it becomes clear that all factors are present. But notice that many of the most important keys to successful cultural change are found in the implement (5) and sustain & renew (6) phases. Most strategic change initiatives fail during the early stages of implementation. Leaders must actively exhibit their own commitment to it in order for the rest of the organization to see it through.

Texas CEO Magazine, in collaboration with Endeavor Management, surveyed top executives to gauge the effect that organizational culture has on the implementation of corporate strategies. The respondents believe that culture is strategically important and that while leadership (good or bad) can be a determinant in the success of strategic cultural initiatives, there are other factors and barriers to successful implementation of cultural change. CEOs understand the company’s culture is the platform upon which to deliver the strategy for growth. It makes sense to pay attention to the transformation program, leadership, and building a community of change so that attitudes, mindsets and behaviors change as well.

Nancy Benthien, based in Houston, TX and Cairo, Egypt, is a Director at Endeavor Management and leads their Cultural Transformation Practice. She is a certified executive coach and cultural consultant working with companies to create sustainable cultural change to achieve their strategic objectives.

TM– The Cultural Transformation Process is a trademark of Endeavor Management