THE VISION & PASSION BEHIND AQUAPONICS AT AGUA DULCE

The Food & Agriculture Organization (FAO) of the United Nations forecasts food production will need to increase 70 percent by 2050 to be ready for the steadily increasing world population. A combination of flat crop yields, new crop diseases, urbanization and soil erosion along with water scarcity are all contributing factors.

According to Lloyd Minick, co-owner of Austin-based aquaponics company, Agua Dulce, traditional agriculture uses 80 percent of the world’s fresh water and is the third largest contributor to greenhouse gasses after energy and transportation. “When you combine that with how quickly our population is growing,” says Minick, “you realize we’ll have to produce a lot more food to keep feeding people, so we have to find more sustainable ways to grow.”

As is so often the case with energetic entrepreneurs, Minick and his business partner, Michael Hanan, dove into food production by starting their first business in 2012 — in a backyard in Austin. It’s called Ten Acre Organics and is an aquaponics operation growing vegetables and raising fish on one-tenth of an acre of land.

What started as a hobby was scalable. “We quickly learned it could be a prototype not only for our production method, but also to identify customers,” said Hanan. They were out to create a local farm model that could be replicated around the world with less water, less land and less labor than conventional agriculture.

Minick and Hanan began selling their produce, herbs and fish at local Austin restaurants, gathering feedback from area chefs to better understand how to price their products and what customers were looking for in terms of quality and service.

Expanding on what they learned with Ten Acre Organics, Minick and Hanan bought the assets of Agua Dulce in 2016 — a much larger aquaponics operation on several acres in East Austin that had gone out of business.

Aquaponics is a method of food production where fish and vegetables are grown together in an aquatic ecosystem. The produce is grown in greenhouses and the fish are raised in large water tanks near the greenhouses. To feed the plants, Agua Dulce (Spanish for “sweet water”) uses a bio-fertilizer system where the waste from the fish is captured, concentrated, bio-digested and distributed into the water in the greenhouse. The water is then oxygenated and the bio-fertilizer grows the plants whose roots are in the water. 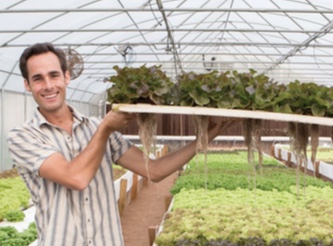 The Agua Dulce greenhouse is just under 5,000 square feet, with six separate grow ponds. The pond in the center produces seedlings and the rest grows the mature plants. “You start with the seedlings,” said Hanan. “It’s about time and space in the greenhouse — how much space does it take up and how much time does it take to grow?”

The plants spend two to three weeks in the seedling stage before they’re transplanted. Agua Dulce primarily grows lettuces, which spend four weeks in the grow-out pond. The plants move down almost like they are on a conveyor belt; when they float to the end, they are ready for harvest.

Plants grown in water with nutrients develop a lot faster than traditional agriculture. For lettuce, the rule of thumb is 15 times more production in a given space in a year. Agua Dulce has product to sell weekly because, unlike traditional agriculture, they harvest and replant every week. Hanan and Minick have a continuous production system rather than a batch system. “In a batch system, we would empty the whole greenhouse at once every seven weeks, then replant. We are planting and harvesting every week,” said Hanan.

Minick and Hanan raise tilapia and native Texas bluegill, but are not yet selling their fish. Once the fish grow to maturity, they forecast harvesting about 200 pounds of fish per month. They expect to break even on the cost of the fish while having an organic fertilizer factory on site, which is almost perfectly balanced for the plants. Their profit will come from the vegetables.

Keeping the fish tanks clean requires a pump that circulates at a rate that exchanges the water in each tank every 45 minutes. Then, it’s aerated via a large pump providing oxygen and aeration continuously. All of the water goes through a bio-filter full of small plastic beads with bacteria that converts the ammonia produced by the fish into nitrates for the plants.

The fish tanks are kept in highly insulated frozen shipping containers with the freezer units removed. The ideal temperature for the fish is 86 degrees, though temperatures 75 or higher keep them content and growing. In the winter a heater keeps everything warm; in the summer, insulation prevents the temperature of the container from rising above 86 degrees.

Hanan and Minick have found their specialty in baby lettuces. The chefs they work with at Austin restaurants like Uchi and Barley Swine want their produce grown locally so it can be served fresh. Most of the lettuce eaten in the U.S. is produced in California and, by the time it gets to Texas it has lost a lot of its freshness and shelf life. Agua Dulce delivers to their customers the same day the lettuce is cut and all of their lettuces have been bred to have a small leaf. They sell green butter head, red and gold frilly mustard, romaine and Chinese spinach.

Agua Dulce has started to specialize in Asian greens and herbs as well as traditional lettuces. “We have built a rapport with these great chefs and they are requesting more and more new types of vegetables. It is very rewarding for us to feed off of each other’s creativity,” said Hanan.

Today, Agua Dulce produce is sold at farmer’s markets, to restaurants and to a small neighborhood grocery store in Austin called in.gredients. “Selling to the large grocery chains is a goal and we have a letter of intent from a large chain. In order for that to happen we have to scale up,” said Minick.

Agua Dulce has a second greenhouse coming online in a few weeks that will take them to profitability in their first year of operation.

As self-admitted idealists who met as fraternity brothers at Southwestern University, Hanan and Minick shared a vision, “To have a positive impact with our lives and our business implementing sustainability, agriculture, community and health, all tied together,” noted Minick.

It seems much of Texas agrees with their vision. Today there are over a dozen aquaponics operations in or near Dallas, Houston and Austin. The Texas A&M AgriLife Extension assists organizations through their county extension agents, and individual operators hold meetups to help newcomers learn both the art and the science of controlled atmosphere agriculture.

Minick and Hanan have found their sweet water of sustainability, agriculture, community and health in aquaponics.