Peruse most business publications’ list of the best cities in the U.S. for fledgling tech companies, and chances are, you’ll see Austin in the ranks – usually near the top. Austin, and Texas as whole, has been getting a lot of attention on a national and even international basis for being a fantastic place to start and build a business. When it comes to the tech business, Silicon Valley is still the standard, but that doesn’t mean it’ll always be that way.

In his book “Screw the Valley,” Author Tim Sprinkle takes on Silicon Valley’s place at the top of the tech totem pole and suggests seven other cities that offer as-good or even better environments for building tech businesses: New York, Boulder, Raleigh, Detroit, Las Vegas, Kansas City and, of course, Austin.

At a Texas CEO event in Austin, sponsored by Khorus, Sprinkle spoke to the crowd and participated in a discussion with Khorus CEO and fellow author Joel Trammell. 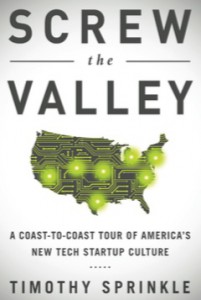 What’s Wrong With the Valley?

Silicon Valley has been the hub for tech business in the U.S. since the ‘70s and it’s still growing. In the third quarter of 2013, close to 46 percent of all venture capital deals went down in the Valley, according to Sprinkle. Those deals totaled more than $2.6 billion in funds, a record-breaking amount. Over the last three years, Silicon Valley has produced 52 percent of the biggest startup exits made through IPOs or acquisitions.

Even with this success, the Valley isn’t necessarily a perfect place to do business.

“The title is a bit derogatory to my friends in California, and they are not real happy with me,” Sprinkle said of his book, “Silicon Valley is still one of the most innovative places in the world, and what we know is that it’s not the only place in the country to do cool things.”

Discussing why Silicon Valley isn’t necessarily a perfect place to start a tech business these days, Sprinkle focused on a few key truths. For starters, the large number of tech companies in the area has led to a scarcity of talent that can make companies go to great lengths to try to attract workers. In his book, Sprinkle says that some companies have even gone so far as to place huge ads on the sides of city buses to draw in employees. Recent Stanford grads are always sought after and even fought over by Valley-based tech companies. All this flashy, expensive competition can make it tough for small startups to get noticed among the big boys in the area.

As far as quality of life is concerned, Silicon Valley is highly crowded and incredibly expensive, especially by Texas’ standards. The median home price in the Bay Area is a whopping $900 thousand, and the consumer price index rises about 2.5 percent per year. Renting a one-bedroom apartment in San Francisco can cost about $2,800 per month. Only 14 percent of homes in the city are considered accessible to middle class buyers.

The business climate in Silicon Valley is also aggressive, according to Sprinkle, and for some, the area’s residents carry a reputation for being a tad on the arrogant side.

“Silicon Valley is such an intense environment,” Sprinkle said. “It’s sink or swim.”

When choosing the cities to discuss in his book, Sprinkle looked for cities where something was happening – cities that were starting to come to the forefront as centers for startups in the tech field. And that’s how Austin made it onto his short list.

The Benefits of Being Austin

Sprinkle cites the inciting event that kicked off a tech revolution in Austin as the day Trilogy moved to the capital city from Silicon Valley, back in 1992. He also points to Dr. George Kozmetsky, who served as dean at

the University of Texas’ McCombs School of Business from 1966 to 1982. During his tenure and beyond, Kozmetsky helped develop the business climate in Austin by doling out essential business advice to anyone and everyone – typically at 5 a.m. And he certainly knew what he was talking about – in 1993, Kozmetsky received the National Medal of Technology.

With these big fish in the small pond that was Austin at the time, the tech business climate began to develop and expand, due in no small part to the communicative and collaborative atmosphere Kozmetsky started.

“Austin has a huge community of feeders like co-working at Capital Factory and Tech Stars and TechRanch, and the Austin Technology Incubator – there’s a lot of support here,” Sprinkle said. He also cited numerous Austin startup success stories such as Dell, HomeAway, Bazzarvoice and Mass Relevance. “All the leaders of these companies are giving back to the community and helping out folks under age 25 who have a dream … Michael Dell is giving them advice … that’s extremely valuable.”

This expert advice is being put to good use. Sprinkle said Austin currently has 1,400 registered tech startups. “That’s a lot of small companies and a large community of leaders.”

That said . . . there is still room for improvement.

In the book, Sprinkle says that universities can be very tied to their local communities, helping to grow and fuel the tech startup atmosphere. Trammell questioned Sprinkle as to which city discussed in the book has the best tie between university and community. His answer made it clear that this is an area where Austin could stand to improve.

“Hands down, it’s Stanford, 100 percent,” Sprinkle said. “They have a venture fund for students available to them for starting companies and a big part of what they are doing is pushing that side of their curriculum.”

Sprinkle repeatedly mentioned SXSW as one of the driving forces behind Austin’s fast-growing tech scene.

“SXSW is an advertisement for Austin as a place where things are made, things happen, and people come together to talk about innovation and new ideas,” Sprinkle said.

The interactive part of the conference has seen tremendous growth over the years. 2015 marks the 26th year of SXSWi, and in his book, Sprinkle notes that several technologies that are now mainstream were first introduced to the public at the conference, including CD-ROM, Twitter, FourSquare, 3-D printing and Siri, before it was acquired by the folks at Apple.

Sprinkle pointed out that Austin is known for being “weird” and having an “outlaw” vibe, thanks in part to hometown heroes such as Willie Nelson and Waylon Jennings. Sprinkle feels this ethos is indicative of why people want to flock to the capital city, especially younger people.

“Austin is a town that celebrates uniqueness and what some call weirdness, those cultural differences,” Sprinkle said, pointing to Austin’s live music and art scenes as some of the reasons people enjoy living in the city.

Compared to Silicon Valley, the cost of living in Austin is extremely affordable. The median home price in town is $204,000, which Sprinkle said is a big draw for tech workers looking to leave California behind and find a new place to settle down. And lately, there have been plenty of jobs available for these new Texans.

In his book, Sprinkle noted that more than 4 million people have moved from California to Texas over the last 20 years. From 2012 to 2014, Texas saw 274,000 new jobs created, besting California in job creation by about 51,000 jobs.

Sprinkle said he doesn’t see any sign of things slowing down in Austin.

“Austin is long-term,” Sprinkle said. “Texas has seen success and busts. Being able to weather the tech bust cycles is something to admire because it gives you a long-term view.”

Talking to an audience of Texas business leaders, Sprinkle said that Austin’s Texas charm and laid-back atmosphere make the city an attractive place to do business compared to the Valley, adding southern hospitality goes a long way to foster a community of inclusiveness.

“Silicon Valley is such an intense environment … it’s sink or swim,” Sprinkle said. “In Austin you have the space and time to do your think without as much pressure.”

When Trammell asked Sprinkle what a better Silicon Valley could look like, Sprinkle responded by warning against trying to copy the Valley’s model.

“You cannot replicate what they are doing and if you try, you’ll fail,” Sprinkle said. “Instead look at what this place has to offer and focus on what Austin does well.”

“This town is a community and it’s possible to get your head around what’s happening here,” Sprinkle said. “You don’t want a town so big that you can’t get access to the right people.”

Sprinkle said he believes Austin is on the right track to continue to grow in the tech sector. Of all the cities he studied for his book, Sprinkle claimed Austin is going through this process the best, thanks to a great community and a great university.

Joel is CEO of Khorus, managing partner of Lone Rock Technology Group, and Chairman Emeritus of the Austin Technology Council.

Joel is the author of “The CEO Tightrope” and a contributing author to Forbes, Entrepreneur and Texas CEO magazines.

This event was sponsored by Khorus. Khorus is a business management solution for CEOs to run their businesses as well as they can be run. With Khorus, leaders communicate clear direction for their company and improve employee engagement.