The “rules” for raising capital, investing in companies and M&A have all changed in the last couple of years. How? All of it can now be done through online platforms for much less investor capital. Not only can investors put in as little as $20 or as much as $5,000 on these deals, but businesses can take advantage of Texas’ investor crowdfunding deals to raise up to $1 million per project — again, all online. 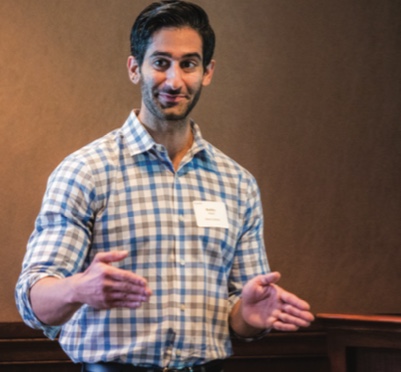 by bringing together businesses and investors to create a transparent marketplace. Investors bid on the price per share and businesses have the opportunity to receive more money by giving away less equity. MassCatalyst is the first patent pending auction marketplace in the U.S.

Crowdfunding used to be simple, Katoli said. It involved taking small amounts of money from a large number of people and giving it to a project. But now, it’s become much more. In fact, there are four different types of crowdfunding, he said. First, donation-based crowdfunding. That’s the kind used by churches. Then, rewards-based campaigns through platforms like Kickstarter, in which donors to a project receive the product — rather than a cut of its profits — when it comes out. Katoli said Oculus VR raised $1 million from their rewards-based campaign for the Oculus Rift virtual reality headset. However, when Facebook bought Oculus Rift for $2 billion, those Kickstarter investors got their product, but received no payout. The other two types of crowdfunding are new on the scene, and are both investment vehicles: equity investors go online to put money into a startup or expansion, while debt-based investors provide loans — usually to a mom and pop shop.

Crowdfunding was made possible through the JOBS Act, Katoli said. The original intent of that 2012 bill was to make capital flows more efficient, or to increase capital flows to states and small businesses. But three separate titles in the JOBS Act opened the way for crowdfunding. Title II targeted accredited investors with no funding limit. Title III was the crowdfunding law, by which money — up to $1 million — could be raised from both accredited and non-accredited investors.

It took Congress a long time to pass the JOBS Act, Katoli said, so individual states, including Texas, passed their own versions of Title III. Texas-based businesses could raise money from Texans. But just days after Katoli’s appearance at the Speaker’s Series, the national version of crowdfunding became law. Now, startups can look for money from all over the country.

Title IV was the most important development, according to Katoli, because it allowed for “mini-IPOs.” Businesses can raise $50 million from both accredited and non-accredited investors. Katoli said there are two tiers of funding within Title IV: Tier I allows firms to raise $20 million without audits or financials. Tier II allows for $50 million, but audits and financial reports are included. “Tier I is where people are going toward,” Katoli said.

So, how do you set up crowdfunding? Katoli outlined two ways. One is a “portal.” This is the original version of crowdfunding, a place where mom and pop shops or startups can get small community deals — say, around $5,000. Portals are not SEC registered, and are not required to be SEC compliant.

The second way, the new way, Katoli said, is a broker-dealer. This does require SEC registration and compliance, and is best used for private placement. Katoli said it is great for funds, real estate developers, oil and gas private equity firms and investment banks. His firm, MassCatalyst, handles payment processing, document execution and storage, and provides investors with a portfolio management dashboard. “What we’ve done is helped investment banks to automate their process,” Katoli said. “What we do makes the lives of investment banks easier.”

But that doesn’t mean crowdfunding is easy. “Most of the companies that do a crowdfunding deal have most of their paperwork together,” Katoli said, “and they are Series A companies and are co-investing alongside a VC firm — those are the ones that do really well.” For example, a company is raising $500,000 — half from a venture capitalist and half from crowdfunding. “If you have 50 to 100 people investing, those people will tell others to use your product and invest themselves,” he said. But if you’re still at the idea stage and need money to build a prototype, “Hustle and get it. There is no free money.”

Katoli said it’s a challenge to find good companies to fund. Trust is important. “Nobody is going to click on a Facebook ad to invest $25,000,” he said. “That doesn’t work.”

He has noticed a change in investors. Older, more traditional investors are getting in the game. Older users are funds and banks, he noted, while younger investors tend to be individuals. Katoli said the Dallas area is seeing deals in real estate, oil and gas, and the Internet of Things.

Katoli sees the potential to grow internationally. “Why not create an exchange where global capital can flow in and out?” he asked. MassCatalyst is working with banks in Mexico City to set up a crowdfunding exchange. He can handle EB-5s through his portal, in which a foreign national can invest $500,000, agrees to create 10 jobs and gets a visa to come to the United States. Right now, most of that action is coming from China, but Katoli said any country can take part. “The project has to boost the economy of the area — you can’t do them in Dallas anymore because we’re booming,” he said.

But there is risk. “Every investment is not a homerun,” Katoli said. And he expects to see a shakeout. “There are only a few players because it takes so much to set up.”

Thank you to our 2016 Speaker Series sponsors: