The transition facing health care—to improve quality and reduce costs—might seem like a simple thing. But it’s not. The industry is keeping its eyes on trends like large mergers and acquisitions, growing Accountable Care Organizations, payment mechanisms, administrative costs, access to health care by the uninsured, and chronic disease management. At the same time, technology is driving changes, while predictive algorithms forecast patient incidents. All this while doctors, patients and their families deal with end of life care.

At a recent Enlightened Speakers Series event at Texas Medical Center in Houston, four health care leaders examined the state of health care, and how its delivery is being redesigned to benefit the patient. They included Dr. Spencer Berthelsen of Kelsey-Seybold Clinics, Dr. Tom Buchholz of The University of Texas MD Anderson Cancer Center, James T. McDeavitt of Baylor College of Medicine and Omar Reid of Harris Health.

Berthelsen said the challenge of dealing with increasing costs for medicine is exacerbated by waste and a diminished benefit of expensive treatments. He said the United States ranks last or next to last on a number of quality metrics, mostly because of a large uninsured population that crowds emergency services. On top of that, he said the Institute of Medicine believes that 30 percent of U.S. health care dollars are spent on things that have minimal effect or no effect for patients.

Health care is unique among enterprises, Berthelsen said, because the person in need of care doesn’t know what’s needed. For example, someone with a headache might just need to take a Tylenol, but they might need an MRI scan or even emergency surgery for a cranial hemorrhage. That couples with the current fee for service system. If a service is provided, it’s paid for. But if no service is provided, there is no pay.

“There is an obvious incentive to provide more service and it pays irrespective of whether the service was beneficial to the patient, or not,” Berthelsen said. “What we need to do is move to a system that pays instead for desirable outcomes for populations of patients over a period of time.” 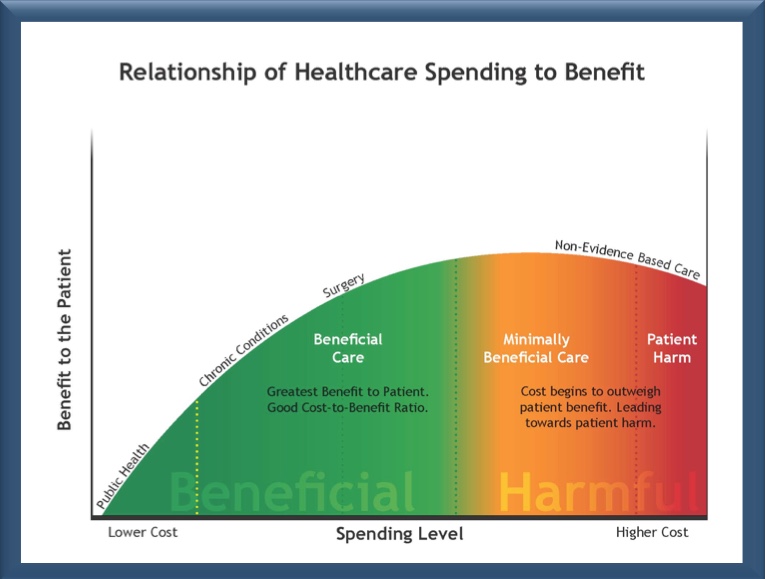 He said we need to move to a different system that pays instead for desirable outcomes for populations of patients over a period of time. An “ideagram” he presented at the event—a diagram expressing ideas, not based on data—showed the relationship of spending to benefit is not a straight line. Based on public health care delivery in Houston and Harris County, the ideagram shows that spending a small amount of money yields a tremendous benefit from things like mosquito control and sanitary water systems. Moving over to other types of care such as controlling high blood pressure, controlling cholesterol, treating heart patients with ace inhibitors, and giving antibiotics to patients with infections also get a good proportional benefit to the patient for a relatively small layout of money.

It’s when we move to higher tech systems that the curve starts to level out. Benefits become incremental, even though expenditures are higher. At the farthest end of the curve, costs are the highest and so much care might be provided that patients are in fact being harmed.

“The key here is to take the part of the curve, which is on the ‘not worth it’ side and eliminate that—that’s the 30 percent the Institute of Medicine is referring to,” Berthelsen said, “and instead fill in the gaps in care on the green side of the curve.”

From this point, we can take one of two paths, Berthelsen said. One path would be a centralized system, where government controls the overall health care budget. The other path involves accountable care, where a group of health care providers is dedicated to the concept of increasing the value of heath care.

“We want to incent true value creation,” Berthelsen said, “but we need more competition in order to have a vital accountable care approach to medicine—that’s how all of us will get better.”

Berthelsen said a lot of effort needs to go to the prevention of medical catastrophes. “That is where the money is, because in any given population, about five percent of the population will consume about 50 percent of the health care dollars.”

He advocated following the evidence. That is, if evidence shows that a patient will not benefit from the treatment being suggested, then it shouldn’t be done. If the patient is involved in the decision making, Berthelsen said they will often choose to take a pass on the procedure.

“We have to visit our century old model and think about how we’re going to enter the next century,” he said.

Part of the problem is the information explosion. Doctors used to be able to keep up with advances in medicine by reading medical journals, but that’s impossible now. The amount of medical knowledge is expected to double every 77 days by 2020. “It is not tenable any more to expect someone to leave their residency, practice for 40 years and remain relevant,” McDeavitt said. “Medical education is a continuous process from the time you enter medical school to the time you retire.”

Another part of the problem is that medicine focuses on the biology of disease, when most of the factors that cause death are environmental, genetic and behavioral.

“If your issue is you drink too much, eat too much, and you never exercise, going to see your primary care physician for a 15 minute visit—even if that 15 minutes is to counsel you on lifestyle changes—doesn’t work,” he said. “We have to build a system to reach the non-biological parts of disease and reach the behavioral parts of disease. Current medical education doesn’t do that.”

For example, 90 percent of medical education is done in hospital, he said, but most of the care delivered occurs in ambulatory facilities “out there.” That’s where med students need to go, he said—not hospitals.

“When you try to influence health across a population and influence behavioral factors,” he said, “and take care of people in a population, it’s no longer about a doctor taking care of a patient, it becomes about developing a system of care to deliver care to patients and improve health in a population.”

Instead of looking at patients to see if they need care now, we need to look at populations to figure out not who is sick, but who is going to be sick so they can be kept and out of the emergency department and kept healthy, he said. That requires a fundamental change in medical education.

“The term, ‘medical’ implies that our responsibility as a health care delivery system is to treat disease and deliver medicine to people,” McDeavitt said. “What we need to be doing is promoting health along with treating disease.”

“The focus on value is important,” said Dr. Thomas Buchholz of MD Anderson Cancer Center. But he said government is focused on general medical issues that are applicable to the entire health system. MD Anderson would like to see more cancer-specific outcomes measured. “We have 21,000 employees and they all have a singular mission: to eradicate the disease of cancer,” he said.

Of 71 drugs approved by the Food and Drug Administration over the past five years, a third of them have come from research done at MD Anderson, Buchholz said. But it all comes at a price. “Research costs money, education costs money, the infrastructure costs money, the technology and innovation in advancing the field costs a lot of money,” he said.

Despite being the number one grant-funded cancer institution from the National Cancer Institute, most of Anderson’s income is from patient care activities. “The ACA [Affordable Care Act], the bundled payments and value-based contracting are all putting pressures on us on a daily basis,” Buchholz said. Every year, he added, payers negotiate a lower reimbursement rate.

The current system is pushing people away from tertiary care centers, such as Anderson, he said. A Preferred Provider Organization (PPO) that had previously provided access to Anderson dropped out, and urged participants to go onto the private insurance exchanges to get another plan. But no other plan offered the same level of choice.

“Could you imagine if you’re at MD Anderson receiving a course of chemo radiation with a planned surgical procedure to remove your esophagus and then coordinate that with a plastic surgeon for reconstruction?” Buchholz asked. “Can you imagine that letter saying you no longer have insurance and there’s no in-network option for MD Anderson and we recommend you go to a different facility in the middle of your course of treatment?” Buchholz said the example is a real consequence of changes brought on by the ACA.

“There is a big push from the government, from our payers to demonstrate value,” Buchholz said. “Value isn’t the same as cost.” He said value can be measured by the outcome for the patient, and include objective elements like survival of cancer, or providing a second opinion of a patient’s diagnosis that might result in anything from a mastectomy to a discovery the patient did not have cancer. “That’s a high value proposition,” he said. “You’ve increased the outcome and decreased the cost by avoiding surgery.”

“Diabetes, heart disease, strokes, and many cancers are preventable,” he said. In 2010, Reid joined the city of Houston as HR director, and he found that health care costs were rising by 10 percent a year, but the cost was $300 million per year. “It was unsustainable,” he said.

So, the city’s strategy changed—to one of keeping healthy people healthy, and making the sick less sick. The emphasis switched to prevention, Reid said.

“We knew we needed to change the culture,” he continued. “We had to stress primary care over ER visits, and we knew that our employees needed to have some ownership and assume accountability.” The city decided to focus on chronic disease patients. But they needed information.

“We know people don’t change unless they hurt enough that they have to, learn enough that they want to or receive enough that they’re able to,” Reid declared. So, the city started an incentive plan. If an employee took a health risk assessment, they got a $50 gift card. About nine percent participated.

That wouldn’t work, so in 2011, those who didn’t participate in the city’s wellness program were assessed a $25 surcharge. “Compliance went from nine percent to 89 percent, showing you the carrot didn’t work and the stick did,” Reid said.

Next, the city moved from a fully insured health plan to a self-funded one. But there was no way to know the results of their monthly expenditure of $25 million. They needed data, and looked at areas of exposure.

One area was the failure of employees to take their medications. With Houston employees making an average salary of $45,000, the cost of medication could be a stumbling block. “We looked at where we could start and we started by giving away free generic medications for diabetes, hypertension, asthma, cardiovascular and cholesterol,” Reid said. Just to give generic drugs to asthmatics cost the city $640,000. But Houston had been spending $6.4 million to cover asthmatics’ visits to emergency rooms and urgent care clinics.

“That was a no brainer for me—give it to them for free and we could cut out some of those costs on urgent care and ER visits,” Reid said.

Putting those types of solutions into action paid off handsomely. Reid said the city saved $42 million over four years, but also avoided paying $250 million. Change requires an organization to be innovative, disruptive and transformative, Reid said.

“Words like comfortable, complacent, and content cannot be part of the conversation,” he added. “The one thing that’s most important is you have to be committed.”

Thank You To Our Speaker Series Sponsors: