As members of the Millennial generation become CEOs, they’ll need to bring a certain skill set to the job. These include communication, a global view, ambidexterity, leading by example, integrity, and being inspirational. In our latest in a series of stories of Millennial CEOs, we ask if they’ve acquired those skills. Meet Houstonian and Millennial CEO Jonathan Blake.

The fashion world moves quickly with trends coming and going and designers hoping for a kind of clairvoyance to see what’s ahead. You have to truly love fashion to make it your business, and Jonathan 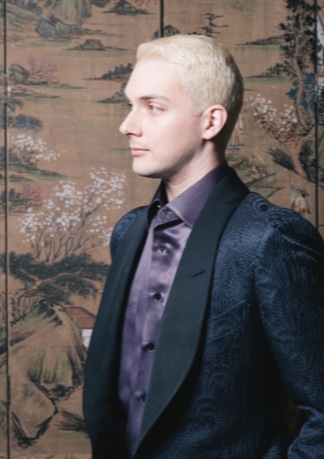 Blake Tinkle enjoys every second of it – he is designer for the Jonathan Blake collection of women’s clothing and line of accessories.

“It’s a high stress environment, which I love because that’s what keeps me energized,” Blake says. “It’s fun!”

It was certainly love that brought Blake into fashion. His greatest desire was to dress glamorous women and celebrities, and that’s just what he does. Blake’s clients include socialites and businesswomen, some of whom are looking for a very special item for one particular event.

In his very first collection, Blake designed a red silk gown covered in 700 roses. A potential buyer dealt him a blow when she told him he was asking way too much for the dress. He sold it the very next day for his asking price to a woman who wore it to a high profile Houston social event and was photographed in the dress – it was an instant boost to Blake’s reputation.

“The whole experience was very fulfilling,” Blake says. “I was very happy.”

Based out of Houston, the Millennial CEO began his clothing and accessory design business in 2012. Typical for startups, finding capital was his biggest challenge. Blake was able to bring on investors to give the company a continuous flow of cash and open more doors for the business, allowing him to grow beyond Houston. In 2015 he expanded beyond his clothing collection into the more profitable accessories like handbags and belts.

With four employees currently, Blake works out of a 900-square-foot retail space in Houston that houses a lounge area and offices along with a dressing room and private salon. Blake’s apparel is constructed in Houston, while he contracts with a European manufacturing plant to create his leather goods and accessories.

What is the voice of the Jonathan Blake brand?

As far as future fashion trends are concerned, Blake believes that classic and timeless clothing is coming into vogue. Consumers are steering away from clothing and accessories covered with brand names and logos in an attempt to be more discreet. Blake says fashionable items will still be made out of quality, luxurious material, but on first glance, determining the cost of an item won’t be as easy as it’s been in the past. In his view, discreet luxury is clothing made from luxurious material without knowing how much it cost or where it came from.

Blake identifies himself as moving between two leadership styles most of the time – first as a democratic leader, and as a pacesetter. Democratic leaders draw on the knowledge and skills of the team members and work with them to meet the groups’ goals. Pacesetters set high standards for performance and are obsessed with doing things better.

One of the biggest lessons he’s learned since starting his business is that it can be challenging to be a nice person while running a company.

“This business has toughened me up,” Blake says, adding that in general he’s a very relaxed and easy-going business leader . . . as long as the work gets done.

Keeping the lines of communication open is key to Blake’s leadership style. He is always eager to receive feedback from his team regarding any of his own actions or anything regarding the business – it’s a point he makes clear throughout the organization.

Blake also believes in maintaining ongoing communication with his customers. He uses social media and email to keep in touch and makes sure his customers understand how much they are appreciated. After a customer has made a purchase, the relationship doesn’t end there. Blake and his team follow up with a phone calls and thank-you notes, as well as a small gift, for those who have made substantial purchases. 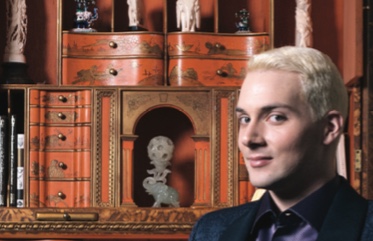 that I expect from those working with me, I expect the same of myself.”

Blake travels to London, a city he feels is the true fashion capital of the world. Residents in the city tend to have more disposable income for fashion and don’t shy away from higher end price tags when purchasing couture or custom-made clothing.

Of the skill sets required for CEOs in the next generation, Blake feels that he is best at inspiring his team and maintaining personal and professional integrity.

“I’m involved in every step of the process,” Blake says. From design, to samples, to the creation of the final product, Blake stays involved to make sure his original vision is maintained. It’s the purpose that got him into the business, and one that continues to drive him each and every day.

His customers not only benefit from his attention to detail, but also his dedication to honesty. Blake recently encountered a situation where a team of seamstresses were using a representative, resulting in increased costs passed on to his customers. He went straight to one of the seamstresses and cut a deal with her, then passed the savings on to his client when he cut out the middleman.

“I could have just pocketed it, but I didn’t,” Blake says. “The money was returned to my client.”

Personally, Blake hopes to expand his own production into shoes and sunglasses in the coming years, further tapping the high-end accessories market, hoping to replicate the success he’s seen with his handbag lines.

Blake is happy to have Houston as his home-base. Most of his clients are heavily diversified, and he’s confident that the city is about to experience an upswing again, bringing more potential customers to the area.

Above all, Blake plans to continue doing what it is he loves, while maintaining his purpose, vision and integrity as he continues to grow his brand. His advice to other Millennial CEOs?

“Whatever it is you want to do – do it, and always do it with kindness.”