Just outside of Yoakum in South Central Texas, a gravel road to the Augustus Ranch winds past long grasses in bloom, cattle in the colors of the earth, and a working windmill ending at the home of Dennis and Cordelia Kaspar. 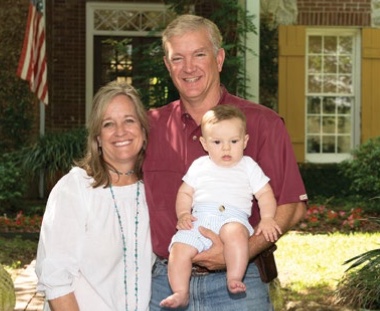 The Kaspar family has been raising cattle for many generations. Dennis Kaspar’s great grandfather, August Kaspar, started ranching on 100 acres in Gonzales County in the 1890s. Today the Augustus Ranch, named in his honor, occupies nearly 5,000 acres in Lavaca County, about 100 miles east of San Antonio.

Around the kitchen table — where all important family discussions are held — Dennis talked about the family heritage. “I’m a fourth generation rancher on my dad’s side,” he said. “He’s an Aggie, class of ’49 — and fifth generation on my mother’s side. She was a Welhausen and a Longhorn.” Yoakum’s library is named The Carl and Mary Welhausen Public Library. Deep, deep Texas roots.

In exploring the strengths, weaknesses, opportunities and threats — a SWOT analysis — of ranching today, Dennis said relationships are at the heart of ranching, and one of its strongest suits. “Business is still based on honesty and deals are still done on handshakes because you’re dealing with men and women of integrity,” Dennis said.

Texas has more cattle than any other state. USDA 2017 statistics show over 12 million head of cattle reside here and production has been increasing. According to Dennis, Gonzales, DeWitt, Jackson and Lavaca Counties are the top four cow-calf counties in the nation, and that’s another strength — a high concentration of an industry in a geographic cluster.

Location is also a strength. Augustus Ranch sits between Houston, San Antonio and Austin, and those cities are a ready market for the ranch’s beef. But the greatest strength is the resources of Texas. 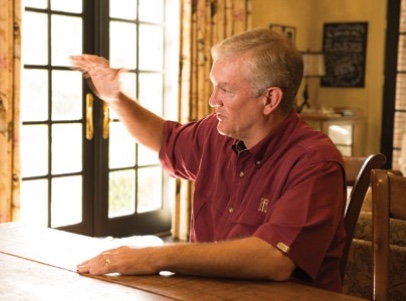 “We have land and we have universities with their teaching,” Dennis said. He and his three brothers are all Aggies. In fact, their Longhorn mother once led the Aggie Moms’ Club.

There are seven phases of cattle production and many operations specialize in two or three phases. Augustus Ranch is involved in all seven, beginning with genetics and ending with retail sales. A rarity in ranching.

The first phase is genetics — part of the technology of agri-business. “Today, the availability of semen, embryos and other genetic technology is being utilized well,” Dennis said. Augustus Ranch buys registered bulls’ EPD (expected prodigy differences), and looks for traits like better ribeye areas, better milking rates or targeted weaning weights for calves. Better genetics give ranchers a solid footing in creating superior animals to sell for a higher price.

The second step is called cow-calf. In this phase, the producer buys registered bulls or registered cows to put into the herd. The Augustus ranch has a variety of breeds, including Brahmins from the Hudgins family in Hungerford, Angus, and Santa Gertrudis and Santa Cruz from the King Ranch.

The cow-calf operation is where the third phase comes in: weaning, or backgrounding. “When you wean that calf you need to straighten them out, which means you’re taking them off a milk diet and changing to a grass or grass-grain diet,” Dennis said. 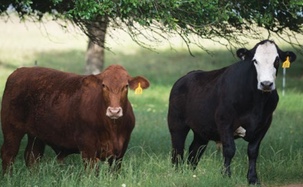 Mammals are born to be weaned, yet the way an animal is weaned can cause stress. Stress brings disease and the use of antibiotics. In a typical wean, calves are taken from the herd and trucked to the sale barn. Research found a typical calf begins to stress and starts dropping weight when separated from the cow. It takes 45 days to get the weight back. “Stress is a major deal for calves and that’s where the antibiotics have come into use,” Dennis said. “Once those animals go into sickness from the stress, they will not produce or perform the way they should in their average daily gains.”

What’s more, he said, “Most of the death loss in the cattle industry comes at that weaning stage because of the stress on those calves in being separated.”

But at Augustus Ranch, a fence wean minimizes stress on the calves. The cows are on one side and the calves on the other side of the fence. They can still rub noses through the fence, but the calf cannot suckle and begins to eat the grass.

The fourth stage is the stocker operation. During this phase, the cow goes from its wean weight, between 300 and 500 pounds, into a program to grow their frame with a wheat or oat diet to get them ready to go into the feed lot and add the rest of their weight.

Putting the meat and muscle on a cow comes in the finishing phase, which is the fifth stage. The final weight is about 1,350 pounds.

Steps six and seven are going to a harvesting facility and then to a red meat program. According to Dennis, the vast majority of product today becomes boxed beef.

At the Augustus Ranch, the cattle’s hooves are on the grass during their entire life and they’re fed in what’s called a high rotational grazing program. Dennis, along with his son, Dennis Chase Kaspar, who now runs the day-to-day ranch operation, decided to become more aggressive in their operation and work with their cattle through all seven phases. Along with being better stewards of their land, they are now more profitable operators. Cordelia Kaspar noted, “In the industry the profit is about $20 per cow for each phase they go through. That’s seven phases at $20, or $140 dollars.” 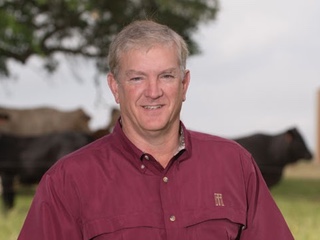 The Kaspars got their inspiration for seven-phase ranching from the work of a South African rancher, Ian Mitchell-Innes. Mitchell-Innes travels the world teaching farmers and ranchers how to tap the energy of their land. On his own ranch, cattle graze with lions constantly in the background. “On 100 acres of land, he’ll rotate the heard either daily or twice a day with anywhere from 3,000 to 6,000 animals on 100 acres,” Dennis said. (By comparison, the Augustus Ranch has 1,300 animals on 5,000 acres.) That rotation means moving the cattle from one pasture or grazing area to the next. It’s high density grazing where the cattle’s urination and defecation fertilize the grasses. When the grass is growing, the cattle need to step on it and push the grass down into the soil to create humus, the organic substance made of decayed plant and animal matter that provides nutrients for the plants and increases the ability of soil to retain water.

Mitchell-Innes calls his step-by-step linear cattle-raising format holistic management. He looks at the environmental, social and financial aspects of each operation, including genetics, diet, grasses and plants, right down to the bacteria, worms and insects.

Dennis Kaspar believes his operation puts energy back into the earth, compared to the more traditional ranch. “There are those who willfully pour soluble chemical fertilizer — money — onto the land and kill soil life and oxidize carbon by turning the soil, using more energy,” he said. “It would have been easier to withdraw a couple million dollars from your bank and burn it . . . and this does not even include the time spent sitting on the tractor and the gas and energy used.”

Dennis Kaspar’s serious expression became even more so when he discussed the challenges he faces. The first is the average age of a rancher — 62. The second is JBS — a Brazilian-owned company that is now the largest producer in the U.S.

But more serious than age and competition are the cost of land and estate taxes. Prices in Lavaca and surrounding counties run between $8,000 and $10,000 per acre, and near Uvalde land has gone as high as $30,000 an acre. Many land buyers are developers who are selling the property for recreational use, making it harder and harder for the next generation of ranchers to buy property and start an operation.

With multiple generations of the Kaspar family on the Augustus Ranch, the death tax is one of their biggest dangers.

The highest margins in the seven phases of raising a herd come in retail. “Within the cattle industry, the profit comes from phase six to phase seven — from the kill to the sale,” Dennis said. He recognized retail controlled what everyone else was going to earn and decided to sell directly to restaurants and consumers via the ranch’s e-commerce website.

That strategy was facilitated by Kent Schoberle, a butcher with an education in the digital arts. Schoberle has made introductions between the Kaspar family and area chefs, and used his expertise creating websites to further develop the Kaspars’ direct-to -consumer e-commerce strategy.

There’s a common trait between chefs and ranchers, noted Cordelia Kaspar. “Their work ethic in those restaurants was stunning to us,” she said. “As a rancher, you have a strong work ethic, then to meet folks like this who are preparing your product is a great experience.”

It’s clear the Kaspars love their life on the ranch. Living out in the country, being able to raise their family on the ranch and welcoming a first grandchild — the sixth generation Kaspar. “I am blessed to live this life with this woman,” Dennis said with a warm smile.

As to the future of Augustus Ranch? “This program has opened my eyes to creating relationships,” Dennis said. “Urban life and rural life come together in what we do and having people like Kent gives us a great bridge to work with folks outside the ranch and to create jobs — it brings our worlds together.”