As members of the Millennial generation become CEOs, they’ll need to bring a certain skill set to the job. These include communication, a global view, ambidexterity, leading by example, integrity, and being inspirational. In our latest in a series of stories of Millennial CEOs, we ask if they’ve acquired those skills. Meet Austinite and Millennial CEO Jae Kim.

Being a CEO means getting used to rolling with the punches. You have to be ready for disaster to strike, and when it does, you have to pick yourself up, dust yourself off and start making the kimchi all over again.

It’s a business lesson that has come early and often to Jae Kim, CEO of Austin’s Chi’lantro, a Korean barbecue restaurant with four mobile units, two brick-and-mortars and two more storefronts on the way before year’s end. On a recent morning, Kim came into the restaurant’s South Lamar location only to find that a water line had broken and the place was flooded. It meant shutting down for most of the day, losing business, and throwing out all the food that was rendered unusable by the break. It was an expensive, frustrating day for Kim, and one that could make anyone want to throw in the towel, but this Millennial CEO knew that letting the frustration get to him would only make things worse for his team and his business. 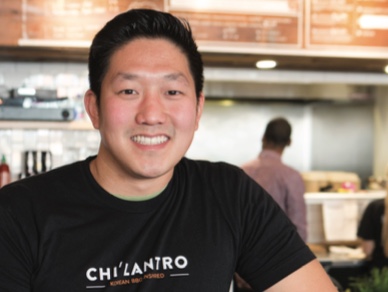 “I might be in a bad mood, but I have to put that away and bring in the positive and upbeat attitude when I walk in the door to give our staff comfort and confidence,” Kim says.

Kim’s story of success is an inspiring one, and enough to give anyone comfort and confidence in his abilities. Kim moved to the U.S. at age 11 and had to learn how to speak English. It wasn’t long before he started his career in the food industry, first working in the back of the house at a Chinese restaurant, the only place that would hire him. By 21 he opened a coffee shop, a venture Kim says burned him out quickly, and began his Korean barbecue business out of a food truck in 2010 at age 26 after working for HEB grocery stores taking care of the sushi departments.

“Chi’lantro happened because I didn’t have the money to start a restaurant and I didn’t have any investors,” Kim says. “I bootstrapped this business and maxed out my credit cards, tapped into my savings to survive for six months.”

That leap of faith has paid off for Kim, who now employs 112 full- and part-time employees. The business has been growing more than 50 percent per year so far, moving from a single food truck to its current array of locations, including those mobile units that travel around to Austin’s numerous festivals, luring new customers to the storefronts. Kim says he expects to hit the $10 million mark within the next two or three years of business.

Necessity is the mother of invention, and that sums up how Kim’s now-famous kimchi fries came to be. Making kimchi is a time-consuming process, and the ingredients aren’t cheap. When he started his food truck, Kim found that the kimchi just wasn’t selling. Rather than tossing out what he’d worked hard to make, Kim gave something new a try – he caramelized the kimchi, put it on top of some fries, and took it to the fresh-from-the-bar 2 a.m. crowd . . . and they loved it. The dish has now spread beyond Austin, becoming a hot new menu item nationwide.

What Type of Leader?

New ideas and new products come easily to Kim, and he loves to share his visions with his team members. After all, it was his innovative vision and inspired thinking that put Chi’lantro on the map.

Kim says he aspires to be a visionary leader, inspiring his team rather than directing them. Growing his business so quickly has led him to rethink and evolve his leadership style over time. For starters, he completely changed his method of communicating.

“I have to be more thoughtful in the decisions I make and more thorough in communicating with the staff,” Kim says. “I have to be thinking about what happens when something goes wrong … I can prevent those mistakes.”

He’s also learned to listen to the feedback and input his staff has to offer. It was a switch for Kim after bootstrapping his business on his own, but he says he’s learned that his employees often come up with better solutions to issues than he can.

Kim stays connected to his staff and inspires them by never being afraid to get his hands dirty. He truly walks the “lead by example” walk.

“I get on the floor of my restaurants and I clean, and I get dirty,” Kim says. “I wash dishes with new staff members and relate to them on a personal level when they come on board – it’s effective.”

Kim says he feels like an ambassador for the Korean community.

“When I speak with the Korean community, they are proud of what I do because we’re serving kimchi, Korean barbecue, and we’re getting our culture and food to people who have never tried it,” Kim says.

Being a Millennial himself, Kim also understands how best to work with his staff, most of who hail from the same generation.

Integrity is large on Kim’s mind these days. He understands that he’s in the business for the long haul, and he believes that maintaining integrity, especially when it comes to finances, raises and bonuses, is crucial to Chi’lantro’s success. Kim is set on building a brand people can trust, and maintaining a positive reputation not only for himself, but for his employees, customers and vendors – the people who 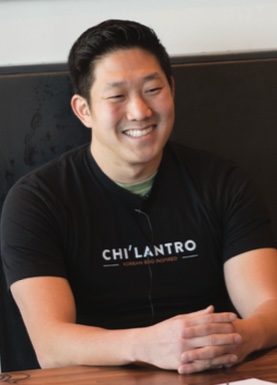 choose to do business with him.

It’s true, the only secret at Chi’lantro is in the sauce. Kim is ready to share his expenses and his revenues. He’s also willing to help any of his employees who might want to move on and start restaurants of their own.

“Those who are better than me will come up with better ideas than mine and we’ll grow together,” Kim says.

One skill that Kim has had to develop since beginning Chi’lantro is working on his ego and humility. When the restaurant was first getting loads of attention and publicity, Kim says he let the exposure go to his head. But he soon realized that the attention was about his restaurant and not him personally, teaching him a valuable lesson about humility and staying grounded so that he can help his business grow.

Even with four brick-and-mortar restaurants planned by the end of 2016, Kim isn’t planning on stopping there. His goal is to reach 10 stores, and then 20, 30, 40. His vision involves growing his customer base and turning his customers into loyal Chi’lantro supporters.

Kim recently received an SBA loan and although he hasn’t taken on any investors yet, it’s something he says he would consider in the future, along with franchising.

Above all, Kim says he is always open to change. He believes that he will continue to see progress and improvement—and that’s a good thing.

“Persistence is how I got here today,” Kim says.

Considering the tale of the late night kimchi fries truck and its swift evolution into a multi-stored dine-in eatery, Kim’s dedication to forward momentum is palpable. And to be doing so well at such a young age, his story is one that’s sure to inspire business leaders from any generation.