Millennial CEOs are arriving on the scene in greater numbers, and they’re shaking up the business world as they climb to the top. Business experts track the things Millennial employees value in the workplace, such as innovation, cutting-edge technology, flexible work schedules and a business purpose that inspires, hoping to attract these up-and-coming young workers. But how does a Millennial CEO work with employees from their own generation as well as those from other generations? Texas CEO interviewed four young business leaders from across the state to discover their individual leadership styles and skill sets and determine what they might be doing differently in the challenging but rewarding world of organizational leadership.

In his book, Primal Leadership, author Daniel Goleman details six different leadership styles: visionary, coaching, affiliative, democratic, pacesetting and commanding. Between the four CEOs interviewed, all identified themselves as either visionary, democratic, and pacesetting or some combination of the three.

Goleman says a CEO with a visionary leadership style is most useful for taking a company in a new direction and moving a team toward new goals. “Visionary leaders articulate where a group is going, but not how it will get there – setting people free to innovate, experiment, and take calculated risks,” Goleman writes.

A democratic leader, according to Goleman, brings a team together through commitment to a plan, drawing on employees’ knowledge and skills. This is helpful with a business that is struggling with its path, since a democratic leader is able to step in, access the group’s collective skills and make a new game plan.

The pacesetting leader, Goleman says, sets a high benchmark for a team’s performance. A pacesetter can be “obsessive about doing things better and faster,” Goleman says, warning that pacesetting can also lead to reduced morale if employees feel they are falling short of expectations.

Dr. Vicky Gordon, an executive coach specializing in leadership development, interviewed 20 of the top CEOs in the U.S. and came away with a list of the top skills the next generation of CEOs will need to bring to the workplace.

Her list includes being a master of communications, which means being ready to adopt to new communications technology, such as social media, and reducing complicated information into a simple message. Also important is to be a global citizen who’s able to see beyond the U.S. borders. Remaining ambidextrous and clairvoyant is crucial to being a CEO in the next generation, as leaders need to anticipate upcoming events and be able to navigate them calmly and cautiously.

It’s important for these leaders to be inspiring and influential to their staff as well, to create and drive passion in leading by example. Lastly, but just as crucially, an up-and-coming young leader must maintain integrity – making customers, employees, investors and the community at large their number-one priority.

Our Texas Millennial CEOs each considered which of these skill sets they bring to the table and touched on their views of how collaboration across generations works within their companies.

When you think of a typical oil business CEO, you probably don’t think of a Millennial taking the helm. There’s a new generation of CEOs as eager to get in on the oil and gas action as their parents and grandparents were. The oil business has long been a moneymaker in Texas, even though the market can be volatile. 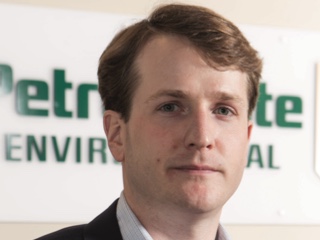 George Wommack is the founder and CEO of Petro Waste Environmental, a business specializing in safely disposing of the byproducts of fracturing oil and natural gas wells.

“You don’t want hydrocarbon traces, muds and drill cuttings spread on the surface of the earth – that needs to be disposed of in a more controlled manner,” Wommack explains. “That’s what we do – we process those materials in a safe manner.”

Currently, Petro Waste has about 35 employees, with half working in the San Antonio offices and half out in the field. Wommack came up with the idea for starting the business in 2012, when he was working in the field of saltwater disposal. When customers repeatedly came to him asking for solid waste disposal services, he figured out how to serve their needs rather than turn them away.

It took a few years of scouting for good disposal locations, going through the permitting process and securing funding from investors – mostly friends and family members – before the business was formed in 2014. Wommack brought on private equity backing to provide much needed cash.

When scouting for private equity backers, Wommack was dedicated to finding partners that shared his business philosophy.

“What was very important to me in sourcing and securing private equity backing was finding a group that shared common goals with me,” Wommack says.

Visionary leaders create a set of goals or dreams for their business, then pass them on to their team members to inspire success, and that’s what Wommack feels he has done with his team.

“I have to create a vision I believe in, that I can pour myself into and that I can get excited about,” Wommack says. “That translates into leadership in a manner where I have to make sure everybody else within the organization shares that vision, and understands it, and can see it’s attainable.”

Wommack also describes himself as a competitive leader who strives for perfection. He aims for the best in every aspect of business, from how the facilities look to how friendly his employees are in customer interactions.

“That’s what we want to strive for everyday,” he says. “How can we do it better?”

One key to sharing your vision with your employees is maintaining a high level of clear communication. Wommack keeps his vision transparent in everyone’s mind by sharing it and checking for disconnects with key members of his team.

“If what I see and what they have in mind isn’t the same, I need to be able to modify what I’m thinking or what they’re thinking so it meshes,” Wommack says. “I don’t force my ideas.”

It’s crucial to Wommack to maintain the best team at Petro Waste, and he is eager to reward his employees in his quest to be the best.

“I try to let people know we are a company that’s about growth and enhancing your skills and adding to your skill set,” Wommack says. “We want people throughout the organization to progress to the next level.”

When asked about integrity in an industry where a lot of people aren’t thrilled to see a landfill pop up next to their property and others are opposed to the disposal of oil drilling waste. Wommack responded, “Integrity is everything to me,” he says. “Do things the right way; and if you can’t, go do something else.”

Wommack also knows the oil business is about relationships and partnerships and in tough times like today, people need each other. “I’ve grown up in this business and I know your word is the most important thing you have – folks need to be able to trust you because everybody knows everybody. In West Texas and South Texas, you know who you can work with,” he said.

A dedication to safety and responsibility helps keep Wommack on track and preserves his integrity.

“We wouldn’t be doing what we do if we didn’t think it was the best thing for the country,” Wommack says.

Wommack has international aspirations. His first project was building a manufacturing facility in El Paso that spanned both sides of the border. He believes there are more opportunities and shale plays all over the globe and he looks forward to the challenge of working in other countries in the future.

“I like to get out of my comfort zone,” Wommack says. “Often when it’s more difficult to do business in another country, the rewards can be very big.”

He is also careful not to spread himself too thin in pursuit of his goals. Wommack understands that it’s easy to get distracted in pursuit of tackling new projects or tapping into new markets or technologies.

The oil and gas business has gone through good and bad cycles and years of layoffs to the point where there’s a big hole in the talent between the oldest and youngest generations. The oldest generation is constantly asked by the youngest to pass on the knowledge and that has created an interesting dynamic within the industry and at Petro Waste. While it might seem especially challenging for a young CEO like Wommack to lead those in the oldest generations, it’s not. The older generations are respected for their knowledge by their younger peers, and the younger generation is respected for their ability to use technology by their older peers.

“We work with a 78 year old geologist who was one of the first in the state – he drilled a test well with Chevron to 18,000 feet . . . even my parents were children when he was starting,” observed Wommack. “You’d think there might be some clashing between generations, and that’s not the case.”

Wommack sees the older generation is finally getting ready to retire because they have transferred their knowledge to the younger generation – and he is doing his part to put the younger talent into the pipeline.

Wommack is planning to take advantage of the current down market to expand, but Petro Waste’s facilities require a significant amount of lead time. It takes years to go through the planning, permitting and construction process – meaning Wommack has to maintain a long-term vision to get through the extensive process.

He wants to make sure that the Petro Waste facilities aren’t just in compliance today, but will also meet standards long into the future. Wommack maintains the highest possible standards and is always looking ahead a few decades to ensure Petro Waste will continue to be successful and safe.

Being a Millennial CEO in the oil business, Wommack partners with plenty of folks from older generations. While he admits this can cause challenges, such as technology gaps between employees and increasing retirement from Baby Boomers, he ultimately thinks this bridging of generations is good for business.

“What we’ve seen is they work together really, really, well,” Wommack says. “The collaboration between the generations is quite dynamic, and they come together to make each other better.”

How to Support Employees’ Mental Health During...