Does every beverage Clayton Christopher touch turn to liquid gold? It’s starting to look that way. Christopher boostrapped his first company, Sweet Leaf Tea, in 1998, brewing his grandmother’s sweet tea recipe in pillowcases and steeping it in 15-gallon crawfish pots. He put his blood, sweat and tears into the business, working seven days a week and flirting with bankruptcy to cover the costs of the fledgling company.

It’s safe to say Christopher’s efforts paid off—a distribution deal with Whole Foods put Sweet Leaf on the map for customers looking for a quality bottled tea with an authentic feel. By 2011, Sweet Leaf was bottling 10,000 bottles of tea per day and earning $53 million in revenue. So it’s no surprise that Nestlé purchased the company that same year, for an undisclosed amount.

Shortly after that sale, Christopher turned his attention to a new product: Deep Eddy vodka. Using the lessons he learned developing Sweet Leaf, Christopher set Deep Eddy apart, using real, quality ingredients to stand out in the flavored vodka game, where artificial flavors were the rule. He kicked things off with a sweet tea flavored vodka, a nod to his roots and also the first flavored vodka produced in Texas.

Turns out, Texas customers were just as excited about a locally made flavored vodka created with high quality ingredients as they were about Sweet Leaf tea. In Deep Eddy’s first year of business, the company took in seven figures in revenue–more than Sweet Leaf did in its first four years. Christopher focused his efforts on selling Deep Eddy vodka in Texas first, before expanding sales outside the state.

Christopher initially bootstrapped Deep Eddy, then took on investors once his product hit the shelves, something he says showed potential investors that their risk was much lower. 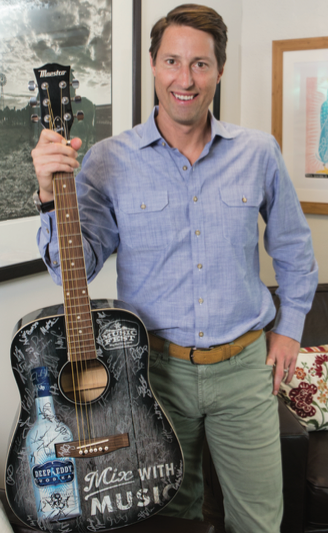 for Christopher—he knew a larger company could help make his dreams for Deep Eddy a reality.

“Your dream as an entrepreneur that has a consumable product is ubiquity–for that brand to be available throughout the U.S. and hopefully even beyond,” Christopher says. “And often times if the opportunity presents itself, it’s easier to get there with a larger strategic company owning the business, so we were super excited to partner with Heaven Hill.”

If anyone needs proof that Christopher knew just what he was doing when he started Deep Eddy, Heaven Hill plans on changing nothing about the brand, keeping the distillery and offices exactly where they are, near Dripping Springs and in Austin, respectively.

“As a founder and former CEO who’s very passionate about culture and Austin, one of the things I was most proud of is that they’re keeping all of our employees,” Christopher says. “They know we’ve got some secret sauce, and they don’t want to mess it up.”

Christopher now plans to work with early stage food and beverage brands, investing and lending his expertise to help other small, local, consumer packaged goods companies follow in his footsteps. He’s partnered with a friend of his, Rohan Oza, who founded Vitamin Water, to start the CAVU Ventures fund, which invests in early- to middle-stage growth brands, mostly in the consumer packaged goods field doing between $1 and $100 million in revenue.

“Most of the investment firms in our space tend to be Wall Street-type folks, who have studied the industry, whereas Rohan and myself have lived in the trenches, building these companies all our careers,” Christopher says.

Some of these up-and-coming brands include Austin’s High Brew coffee, along with Mighty Swell, a company launching this month that makes a sparkling, juice-based, ready-to-drink cocktail in a can.

Christopher is also on the board of SKU, an incubator for consumer packaged goods based in Austin, where he offers his advice on getting started to local food and beverage companies trying to get off the ground—and there’s a bunch of them.

“The growth in the food and beverage industry in Austin has been phenomenal. Hundreds of millions of dollars have been poured into early-stage investments in central Texas,” Christopher says. “I see Austin as being the number-one city in America to start a food or beverage brand.”

Austinites do love to support local businesses, and people outside of Austin tend to have a favorable view of the city as well, helping to boost nationwide sales for central Texas-based brands.

“I’m really passionate and excited about Austin,” Christopher says. “It’s hard to find people who are willing to help in larger cities, who want to see these brands grow, but in Austin we have such a culture of helping each other out and being friendly that I want more brands to start in Austin, for this to be the hub of consumer packaged goods. It’s the right city for it.”

Reflecting on Christopher’s dual, rapid successes with Sweet Leaf and Deep Eddy, you have to wonder just what’s his secret. Besides making quality products that people want to buy, he credits his people, plus being able to evoke a feeling through packaging and marketing that truly brings brands to life.

“The stars aligned for us in a big way,” Christopher says of Deep Eddy’s success. “It was really a combination of the right time, the right team, the right product and the right marketing. It’s great when a plan comes together.” 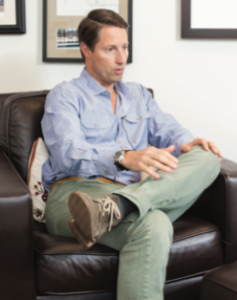 Christopher advises new businesses to invest in the best people they can find. Even if it means higher start-up costs—the payoff is huge and can make all the difference when it comes to growth.

“One of the things I wanted to do from day one at Deep Eddy was to create a world-class team. When I started Sweet Leaf, I didn’t think I could afford to hire the best and the brightest,” Christopher says. “At Deep Eddy we took that attitude from day one, that we were going to hire experts and people at the top of their game, so that really accelerated the growth.”

Deep Eddy vodka’s packaging is gorgeous—labels are decorated with a reclining, illustrated woman dipping her toe into a pool of water. The image invokes a summer day spent outside by a lake . . . and that’s the point. Christopher intended to create a lifestyle brand from day one that would draw in customers. He was looking for something welcoming, something attractive, something fun and lighthearted. It’s a feeling he hit on the head when he came up with the slogan, “Please daydrink responsibly.”

“The packaging and the marketing were award-winning, and that’s something I take a lot of pride in,” Christopher says. “We did a great job on our marketing and on creating an authentic lifestyle brand, more than just an image or a graphic.”

Given his success, it’s not surprising to consider that he has been able to build such dedicated, top-notch teams. From the group of tail-wagging Labradors waiting at the door to welcome you into the office, to the backyard plunge pool outside the company’s headquarters, to Christopher’s admission that 4 p.m. cocktail tastings are sometimes a thing that happens around there . . . just hanging out with the Deep Eddy crew is enough to make you want to ask if they’re hiring.

“We didn’t take ourselves too seriously, but we took our products seriously. There was an intense dedication to work, but no one was really worried about getting credit–we just wanted to win,” Christopher says. “Work hard, play hard, and at the end of the day, have fun.”

Click here to read the 2011 story about Clayton Christopher.

A Vision Clear and Straight